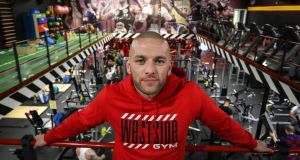 Simon Murphy, owner of the Westside Gym in Blanchardstown, who has vowed to open his business in defiance of the Level 5 restrictions. Photograph: Crispin Rodwell

A gym in west Dublin is due to open on Thursday morning as normal despite Level 5 restrictions requiring it to close.

Simon Murphy, owner of Westside gym in Blanchardstown, said the gym will open to existing members only and that the response from membership has been “overwhelmingly positive”.

Under the Government’s Level 5 restrictions, due to come into effect for six weeks from midnight on Wednesday, gyms, leisure centres and swimming pools are required to close.

Mr Murphy said he decided to keep the gym open after hearing Taoiseach Micheál Martin’s speech on Monday night and after positive feedback to the suggestion on social media of remaining open in recent weeks.

“The statistics are there to show how small the transmission has been throughout gyms,” Mr Murphy told The Irish Times.

“I believe that I can provide as safe as possible an environment for people to train in and I believe that this is an essential part of my members’ lives and that’s who I’m here to cater to.

Mr Murphy said there has been one confirmed case of Covid-19 among his members and that a training partner was contacted as a possible close contact, who subsequently tested negative for the virus.

“This is for existing members only, we’re not accepting new members. It’s not a money-making exercise. It’s about being sustainable for people’s mental health and also sustaining our business,” he added.

Mr Murphy said staff were also happy to remain working despite the restrictions.

“I outlined that anyone who wasn’t comfortable with the stance I was going to take, their job would still be there waiting for them when we are allowed to reopen and hopefully get back to stage 3 or whatever the situation may be,” he said.

“But not one of them had any objection or had any concerns about going forward and taking the stance we have and have been totally supportive.”