Patient lobby groups say the case for reprioritisation was unequivocal 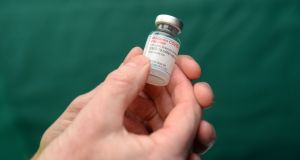 Many patients with serious underlying health conditions are to be vaccinated earlier against Covid-19, under a change to the Government’s vaccine allocation strategy.

Those aged 16 to 69 with a medical condition that puts them at very high risk of severe disease and death if they contract Covid-19 will now be inoculated in the fourth cohort to receive vaccines under the strategy, after those aged over 70.

It was originally planned to vaccinate people with underlying conditions in the seventh cohort, but many in this group are being moved up the list because “they would suffer the worst outcomes if they were to get the disease”, according to Minister for Health Stephen Donnelly.

Among those who will now be inoculated in the fourth cohort are cancer patients undergoing chemo- or radiotherapy, people on dialysis or with uncontrolled diabetes, adults with Down syndrome, and patients with motor neurone disease or severe cystic fibrosis.

Cohort five will consist of those aged between 65 and 69 whose underlying condition puts them at a high risk of severe disease and death. This includes cancer patients not covered under the previous cohort, those with other intellectual disabilities or cerebral palsy, and those with liver cirrhosis or severe asthma, amongst other conditions.

Those aged 65-69 who are not considered high risk, who were previously the fifth cohort, will now be in cohort six, and will be vaccinated at the same time as healthcare workers who are not in a patient-facing role and key workers deemed essential to the vaccine programme.

Cohort seven will consist of those aged 16-64 who have an underlying condition that puts them at high risk of severe disease and death if they contract Covid-19.

The National Immunisation Advisory Committee has advised that while any of the three authorised vaccines can be given to adults aged from 16 to 69, mRNA vaccines, ie those from Pfizer/BioNTech and Moderna, should preferably be given to people in these age groups who have medical conditions that may limit their immune response to the vaccine.

“The primary aim of Ireland’s Covid-19 vaccine allocation strategy remains the same,” Mr Donnelly said. “We are continuing to vaccinate those who are most likely to suffer severe disease and, sadly, death as a result of contracting Covid-19. The changes we are making are based on the latest clinical and medical advice that those we are moving up the list would suffer the worst outcomes if they were to get the disease.”

The change has been broadly welcomed. Cystic Fibrosis Ireland (CFI) said the reprioritisation “has given many of the most medically vulnerable people in Ireland a stronger sense of hope today”.

However, the group urged a strong focus on others at high risk and said further consideration should also be given to vulnerable carers as the pace of vaccination increases.

The Irish Kidney Association pointed out a Covid-19 mortality rate of 20 per cent among kidney transplant recipients, and 25 per cent among those on dialysis.

“This has brought the vulnerability of patients into stark focus and this has also brought huge anxiety to families and carers as they endeavour to keep their households going whilst their loved ones cocoon,” it said after the announcement.

“The case for change was clear and unequivocal with the statistics and expert medical opinion supporting an increased priority.”