Public tolerance for vague, incomplete or out-dated information is at zero 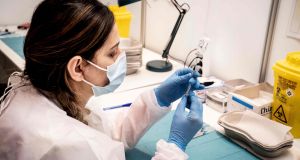 Denmark – with the same population as Ireland and a far older demographic profile – is working off a plan it calculates will end with 900,000 more vaccines than expected, despite the let-downs. Photograph: Liselotte Sabroe/AFP via Getty Images

Pounded by wind and rain, tormented by government ministers speaking in a Babel of tongues and seeming unable to agree a position – or to turn up for interviews adequately briefed – even the most Zen-like of people are starting to kick the furniture around.

It’s worth noting that this paper’s Pat Leahy ascribes the shambolic communications to a collapse of government confidence following the great Christmas breakout. For which Joe Citizen should not be lambasted, apparently.

Let’s skip past the fact that fewer than half of us were conscientiously following HSE Covid-19 guidelines in December, according to the Department of Health/Amarach tracker. This week, invited to choose from a smorgasbord of pain, anger, intolerance, hope and despair to describe their feelings, more than a fifth of respondents chose anger. No specific reasons were given but they might include the suggestion that increasing cases of Covid among young people arise from their sipping “cups of tea” in each other’s houses. An off-licence click-and-deliver manager might tell a different story.

Nonetheless, the government’s almost comedic approach to mandatory hotel quarantine (MHQ for short) has become totemic for all that ails us. The revelation of the Brazil variant among arrivals has clinched it.

Negativity has leached into the nation’s pores.

This was the sixth weekend since we were told that MHQ was “imminent”, says a rural politician. Constituents’ emails and texts have taken a decidedly more direct and hostile tone. A usually calm Green says she kicked a desk when she heard Eamon Ryan say that MHQ would be along “in a week or two”. That infuriating vagueness may well be down to a ministerial loss of confidence but it also signifies a failure to read the room and prepare adequately for interviews.

Listeners, entirely predictably, will be wielding the aural equivalent of a high-lighter pen and will kick furniture at the use of terms such as “a week or two” or – the latest – “three or four weeks”. For that and several other reasons, it was difficult to see why Stephen Donnelly agreed to be interviewed on Monday’s Claire Byrne Live. Tolerance for vague, incomplete or out-dated information is at zero.

On the other hand, interviewers routinely badger ministers with questions about which there can be no absolute answer. Certainty is demanded about vaccination schedules that wholly depend on vaccines yet to be approved or delivered.

It was possible to feel a smidgen of sympathy for Donnelly a few weeks ago when he was accused of “over-promising” on the target of 700,000 vaccinations by the end of March. The number was “highly provisional” he said at the time. It was hardly his fault that AstraZeneca suddenly announced a stunning shortfall in its EU delivery schedule.

The net result is that any further Covid-related goals will be trebly encrusted with caveats and legalistic framing at a time when the sensible management of expectations should be balanced with a dose of hopefulness. The September target by which everyone in the country could look forward to being vaccinated has now become merely “aspirational”, based on “provisional” timelines and “dependent on commitments given”.

The spectacle of AstraZeneca’s vaccine being jabbed into every bared arm in the UK – the world headquarters of over-promising, to put it charitably – has hardly helped the general humour.

But perspective is vital. When even Boris Johnson, the most reckless leader in Europe, is berated for approaching the great unlocking with an abundance of caution, we should pay attention.

In Germany progress has been stunted by the virus mutations and people are bracing for what may be their third wave. Schools are finally reopening there after two months, some with halved class sizes and with children being taught on alternate days.

Meanwhile, the Danish Health Authority managed to light up the internet by cheerfully announcing that anyone who wants to be inoculated against Covid will be given the chance to do so by June 27th , all complete for the summer holidays.

Denmark – with the same population as Ireland and a far older demographic profile – is working off a plan it calculates will end with 900,000 more vaccines than expected, despite the let-downs. But just like Ireland, its plan is dependent on expected vaccine deliveries and the much-anticipated one-shot Johnson & Johnson version. As of Sunday, it was fourth in the league for first dose vaccinations. Ireland stood at 14th (using week-old figures) above countries such as Sweden, Finland, France and Germany.

Of course plenty of commentators will point to Denmark’s vastly superior primary care system, its fully digitised, fully integrated, centralised data base and public services card identifier, all destined to boost its vaccination speeds. It’s also possible that many Danes will not avail of the vaccine. A third demurred when asked whether they would definitely take it.

So have we become competitors in a kind of a hare and the tortoise race against the happiest nation in the world? A million vaccinations a month from April is the plan, according to the HSE’s Paul Reid.

How would we cope with a sudden avalanche of vaccines? Competition and constructive criticism are healthy of course. But so is hope – and an occasional acknowledgement of our luck to live where we do in this time.