Lack of trust causing women to put their lives at risk, CervicalCheck warns 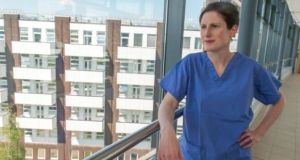 A lack of trust in screening programmes is causing women with cervical cancer to put their lives and health at risk, CervicalCheck officials have warned.

Some are turning to “weird and wacky” therapies and unproven treatments due to an “overwhelming” lack of trust in the programmes, according to CervicalCheck clinical director Dr Nóirín Russell.

Plans to transfer most lab work from the US to Ireland next year are in jeopardy, due to recruitment difficulties caused by the continuing fall-out from the 2019 controversy over a botched internal audit.

A new laboratory at the Coombe hospital in Dublin due to open in mid-2022 is supposed to take over most screening from Quest Diagnostics, which currently processes 90 per cent of the work in the US.

Because of the recruitment issues, “at the moment, we would not be able to make that our majority lab”, National Screening Services chief executive Fiona Murphy said.

Meanwhile, the number of women attending for cervical cancer screening last year, when services were interrupted by the Covid-19 pandemic, was more than 100,000 lower than expected.

Recruitment issues have also affected BreastCheck, where more than 20 senior radiology and radiographer posts remain unfilled. Full breast screening services resumed this week after being reduced during the third wave of the pandemic.

Ms Murphy said she was worried about the “current discourse” on screening and the risks it might pose.

“We are struggling to get people to join screening because of the atmosphere that we have.” With litigation costs continuing to rise, “somebody is going to come along at some stage and say, this isn’t ethical any more and we need to stop”.

“There’s a very very real risk that if the environment doesn’t change, we won’t have a screening programme,” Dr Russell told a media briefing on Tuesday. “We’re hearing from cancer specialists that people aren’t trusting their advice,” Ms Murphy said. “Women are putting themselves at risk because of their lack of trust in us.”

She said it was “shocking and upsetting” to hear radiation oncologists say women don’t trust the screening programme. “They’re turning down proven, evidence-based medicine and therapies that would lead to cure, and they’re choosing to have some weird and wacky stuff such as vitamin C infusions and also unproven treatments.”

Most women in the 221+ group caught up in the original controversy were diagnosed early and had their cancers cured, Dr Russell said. “Being diagnosed with stage 1 cancer in Ireland is considered a failure whereas in every other country it’s considered a success. That’s a very strange place for us to be.”