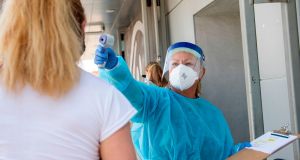 The State’s incidence of Covid-19 appears set to surpass that of the UK for the first time since the pandemic started, new figures show. File photograph: Valerie Macon/AFP via Getty Images

The State’s incidence of Covid-19 appears set to surpass that of the UK for the first time since the pandemic started, new figures show.

The 14-day incidence of the disease in the Republic has increased sevenfold in the space of three weeks, to reach 15.8 cases per 100,000 of population, according to an update from the European Centre for Disease Prevention and Control yesterday.

This compares to a figure of 15.9 in the UK, which a month ago had an incidence almost eight times that of Ireland. Since then, case numbers in the UK have been steady, although yesterday they exceeded 1,000 for the first time since June.

Covid-19 is now being detected at a higher rate in the State than in Germany and Slovenia and a number of other EU countries not on the Government’s green list.

The figures highlight the dramatic increase in the number of cases in recent weeks, driven largely by outbreaks in food processing plants in the midlands.

Kildare Chilling in Kildare town, which has registered 150 cases, and O’Brien Fine Foods in Timahoe, with 86 cases, have suspended production, while Irish Dog Foods in Naas, where 53 cases have been reported, has shelved plans to reopen today.

A fourth plant, Carroll’s Cuisine in Tullamore, Co Offaly, which has nine cases, remains open but is undergoing a deep-clean and yesterday tested a further 210 staff.

The Department of Health has asked the HSE to begin testing all staff working in meat processing facilities nationwide. The HSE is meanwhile finalising plans to test asylum seekers in all direct provision centres nationwide, fortnightly.

Covid-19 clusters have been reported in a number of direct provision centres in recent weeks, some of them linked to staff working at meat plants.

Testing is also restarting from today for healthcare workers in nursing homes, starting initially with staff in the three counties under local restrictions, counties Kildare, Laois and Offaly.

Another 68 confirmed cases of Covid-19 were disclosed by the National Public Health Emergency Team (NPHET) yesterday evening; 174 new cases had been reported by NPHET on Saturday. One new Covid-19-related death was reported over the weekend.

Meanwhile, it has emerged that the Government may draw up a new plan to deal with pandemic contingencies such as a second serious wave of coronavirus or localised outbreaks.

Minister for Health Stephen Donnelly said NPHET has produced a view for the Government to consider. It would replace the current plan, which might no longer be applicable given changed circumstances.

The Cabinet subcommittee on Covid-19 is to hold a meeting tomorrow by video-link to discuss the recent spike in new cases and the response it deems necessary.

Mr Donnelly is also expected to introduce a ban on non-essential travel from the US and other Covid-19 hotspots where the virus continues to spread rapidly.