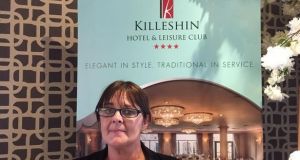 In the foyer of the Killeshin Hotel on the Dublin Road in Portlaoise an extended family is checking out. They had booked in before the new restrictions were implemented at midnight on Friday.

“We had to honour their bookings,” explained duty manager Bernadette Culleton. This weekend the hotel had to cancel their wedding showcase.

“When we called to explain what has happening some were disappointed, but they understood,” said Culleton. Several couples were booked into the Killeshin’s sister hotels, the Castletroy Park, Charleville Park and Loughrea in Galway.

“We have two small weddings coming up, touch wood, one due on 22nd August, but we don’t know what’s going to happen there.

“I think people are feeling, ‘oh, this again, we have to do it, there’s no point in kicking up about it, you’ll just get more frustrated and we just have to go with it now.’ At the end of the day they do need to do it for people’s safety. I know it’s a pandemic, none of us have been through this before, the Government probably doesn’t know what or how to deal with it.”

In the Style Bar in the centre of the town Erin Moran and her colleagues are working away even though the number of customers is down.

“A lot of people are on edge about coming in, the regulars are scared, our older clientele haven’t been back. People are not showing up for appointments, there is a lot of confusion and surprise that we are open.”

Across the road in the Laois Shopping Centre Peter Ashe is shopping with his wife. The truck driver said he has noticed that there are fewer people in the shops and that the majority are wearing masks.

“I see a difference, but I don’t know if it’s going to help. I’m convinced the country should have gone into a complete second lockdown, including the factories.”

At the entrance to Penneys, security guard Willie Conroy is instructing people to wear their masks, sanitise hands and he is clicking numbers. “Most people are grand, there are no problems with them but you’re always going to have one or two. It [restrictions] was the right thing to do, people should have been wearing masks in the first place.”

In the Jack & Jones shop Vlad Apopei, also feels that the public should be patient. “Something like this: it’s a global pandemic, it’s not going to blow over any time soon, we realistically should be patient with it, it’s just that none of us have ever dealt with anything like this in our lifetime, so it’s not going to be easy for us to just stay home all the time and abide by the rules. There will be some people who break the rules, we’ve seen that on the news.

Patricia McGrath, who has worked as a cleaner in the Laois Shopping Centre for more than four years was busy ensuring all surfaces were cleaned down and sanitised. She had noted a decline in footfall on Saturday and Sunday.

“I think people are afraid now at this stage. They are happier to stay at home rather than taking a chance.”

One person for whom the new restrictions could have had an impact is student Buri Heffernan who is 14 weeks into a 16-week online Personal Trainer course for which he had practical exams in Kilkenny on Sunday.

“We were stopped by the guards just outside Durrow, coming on to the border with Kilkenny. They were very understanding when we told them it was for educational purposes.”

Portlaoise-based teacher Katie Wallace acknowledged that the new restrictions will not have much of an impact on her daily life at present. But she has had to cancel a holiday elsewhere in the country next week.

“There should have been earlier and wider testing in meat plants. That might have helped and maybe we wouldn’t be facing into a lockdown situation again.”