‘Our hearts are broken’ – implications of fresh lockdown sink in

Anger and upset as restrictions are imposed in three counties 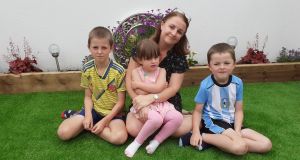 Pictured at their home in Kilcock, Co Kildare are Claire Kenny and her children Ryan (9), Karina (3) and Shane (7)

“Our hearts are broken,” said Claire Kenny from Kildare as the implications of the new travel restrictions on people from that county – and from Laois and Offaly –- began to sink in.

She is the mother of three children aged three, seven and almost nine and, like many people across the country, Ms Kenny and her family had already made many sacrifices as a result of the pandemic before the fresh blow hit.

“During the full lockdown, an uncle passed away from Covid and we couldn’t attend the funeral,” she said. Her oldest child missed out on her communion, while a summer holiday to Spain had to be abandoned.

Both her parents were hospitalised in recent months for non-Covid-related conditions and she said restrictions of visiting “our loved ones in hospital was awful. I felt that they had no one to advocate for them. They couldn’t get a cold drink when they needed one, or a newspaper.”

But through it all, she and her family felt they had at least one thing to look forward to: they had a break in Donegal arranged for the middle of August.

“A few years back my sister-in-law and my brother started renting the same house every year and everyone would visit for a few days. We all loved it,” she said.

Last year it didn’t happen. “On the final day of a trip to Colombia, my brother fell off a mountain bike and damaged his kidney. He ended up in hospital for seven weeks,” she said. So last year’s cancellation meant that this year’s trip was to be “particularly special” .

“We were going back after two years, after the lockdown and my sister-in-law turns 40 during the week. It was what we were all living for. Until last Friday, when the Government announced that Kildare was in lockdown. Our hearts are broken. My brother and sister-in-law came over from London a week ago and are quarantining ahead of the trip. Now we won’t get to see them.”

She said what galls her is that her home “is almost at the Meath border, it’s a matter of yards, but as it’s still Kildare our kids won’t get to see their aunt and uncle and it’s likely we won’t get to see them this year. It doesn’t make sense. Geographically there are towns closer to one of the factories that can still go about their lives as normal.”

There have been coronavirus clusters in meat factories.

She said that she had “done everything that was asked of me over the last five months” and stressed the importance of her children being able to return to school. “I want everyone to be safe. I want this virus to go away but it’s hard not to feel extremely angry right now. I realise that it could be a lot worse, and there are people dealing with worse situations, but right now I am absolutely heartbroken and I can’t stop crying.”

Ann Dalton from Celbridge said she and a group of nine were to travel west in the days ahead with the “accommodation and island ferry all booked”. “We were also due to travel to Spain tomorrow, with no refund on those flights. Very annoying and upsetting as we have all being doing what we can to stay safe,” she said

“We were supposed to be scattering my mother’s ashes next Saturday,” Claire Hallahan told The Irish Times. “However, my brother and his family live in Straffan and can’t make it down to Cork. We have cancelled it for now. I get it, I prefer that they’re safe at home.”