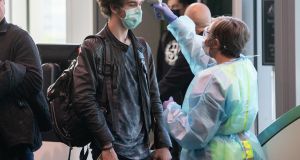 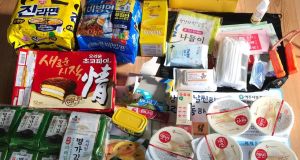 A selection of foods supplied by a local council in South Korea to each new arrival for the 14-day self-quarantine. It includes masks, a thermometer and chocolates. Photograph: Yongnam Park 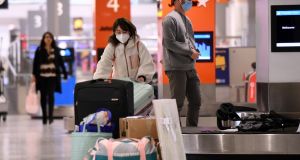 Much of the world has closed its borders to non-essential travel to prevent imported Covid-19 infections but strategies to curb the spread of coronavirus vary wildly from country to country.

While Ireland is seen by some as relatively light-touch in restricting visitors, other states are unsparing in isolating and tracking anyone who touches down at their airports during the pandemic.

Data from the online travel booking site Kayak suggests more than 100 countries are shut off to all international travel, 70 are partially closed and about 36 – including Ireland – are deemed to have few restrictions for overseas arrivals.

For those who can travel to more authoritarian yet once easily accessed destinations, they can expect mandatory quarantines in official facilities – luxury hotels for the lucky – surveillance and lengthy jail terms for breaching isolation orders.

Flout the strict quarantine measures on arrival in South Korea at your peril: a year in prison and a fine of 10 million KRW (€7,300) can be handed down under the country’s disease control legislation. Visitors can also be deported or banned from the country for refusing to follow orders.

Seen as an early success story in controlling the spread of Covid-19 – although it has reported a second wave in recent weeks – Seoul has deployed a carrot and stick approach to stemming imported infections.

All air passengers must have their temperature checked before boarding a plane to the East Asian republic. Anyone gauging above 37.5 degrees on the thermometer or displaying symptoms of Covid-19 is told to turn back, with the promise of a refund.

Passengers who do arrive in South Korea have to undergo a mandatory 14-day quarantine as well as testing for coronavirus. Those with a confirmed residence get a supply kit from the local council to help them isolate.

Rev Yongnam Park, a minister with the Methodist Church in Rathgar, Dublin, said he was pleasantly surprised to receive one such pack on his recent arrival in South Korea, where he was visiting family. The pack included masks, a thermometer, hand sanitiser, food, snacks and even chocolates.

Those without a residence must stay in one of the government’s eight designated quarantine facilities for overseas arrivals showing no symptoms.

One of them – the Ramada hotel in Yongin – has been subject to protests. Locals who oppose the facility being sited in their neighbourhood bang drums and play loud music outside throughout the day.

Hundreds of foreigners holed up inside – and paying 100,000 KRW (€73 a night for the pleasure) – cannot leave their rooms as police monitor CCTV cameras to ensure compliance with the order.

Test results are available within hours, and anyone testing positive is treated free at a hospital or community treatment centre, but may not be discharged for more than a month.

In the unlikely event of getting into Singapore – the city state is shut to all short-term visitors – a surprise stay at some of Asia’s finest hotels might cushion the curtailment of a strictly enforced two-week quarantine.

Even citizens, long-term residents and foreigners with long-term passes returning to the island must serve a 14-day Stay Home Notice (SHN).

Passengers arriving from a small number of countries, if approved, can serve this at their normal place of residence under strict surveillance. But many will have to stay at one of 7,500 hotel rooms or serviced apartments, block-booked by the government to isolate arrivals.

Some of those hotels include international luxury chains such as Hilton Worldwide, InterContinental Hotels Group and Accor SA. On landing, some passengers have been whisked off to the Shangri-La’s five-star Rasa Sentosa Resort and Spa, with room service and a sea view from the balcony included.

Earlier in the crisis, the bill, which normally runs into hundreds of euro a night, was picked up by the Singaporean taxpayer, but authorities have since imposed a charge on those who are neither citizens nor permanent residents.

Those serving their SHN at their normal residence can expect regular phone calls, WhatsApp and text messages from the Immigration and Checkpoints Authority (ICA). These must be responded to within one hour and include confirmation of your exact whereabouts.

ICA officials will also video call those in quarantine to check they are where they say they are, while house visits are also carried out. Citizens of the surveillance-heavy state are encouraged to report any suspected breaches.

Imprisonment and fines can be imposed on those found failing to comply, while residency can also be revoked.

Everyone returning to Singapore is tested for Covid-19 at a designated community testing facility, at their own cost.

Even if showing no symptoms, all arrivals in Australia are quarantined for 14 days in designated accommodation, generally hotels.

On touchdown, passengers are examined by a nurse, who takes their temperature. Those who display symptoms are taken to a healthcare-staffed hotel where they will be isolated and tested for the virus.

But even those without symptoms and who test negative have to remain in a quarantine hotel – chosen by the authorities on the day of arrival – for the full two weeks. The Australian Air Force has been drafted in to transport passengers on chartered buses to their unknown destination.

Exemptions to hotel quarantine are considered only where there are strong medical, health or compassionate grounds.

The cost of supervised isolation at hotels was previously courtesy of the authorities, with room service also covered, but some regions – including New South Wales, which has spent AUS$50 million ($30.5 million) on quarantining arrivals, and South Australia – are ending the subsidy.

Only nationals and those with valid residence permits can travel to South Africa, which has all but sealed off its airspace to passenger flights.

Screening for arrivals includes temperature checks and recent travel history, before a mandatory 14-day isolation at a state-appointed facility, usually, but not always, a hotel.

Foreigners travelling to Taiwan need to have a valid visa, which will not be granted for tourism, study or visiting friends.

Arrivals must provide authorities with a negative Covid-19 test, which was carried out within three days before boarding their flight. They must also fill in a health declaration, including travel history for the previous two weeks.

If you don’t have a Taiwanese mobile phone service provider, you can expect to be asked to install a local Sim card, which will be used to track your location.

It is then a legal requirement to self-isolate for 14 days, unless travelling from a country deemed low risk by authorities, which may grant a reduced quarantine period.

For those without a residence, there are government-approved quarantine facilities, ranging from no-frills hostels to luxury hotels, where you are strictly confined to your room. The cost of accommodation is offset with only a small subsidy from the Taiwanese taxpayer. Breaches can incur fines.

Visitors have reported being sprayed down with disinfectant before being ushered onto a government-approved quarantine taxi to their chosen lodgings.