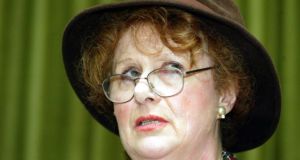 Mary Kenny: Her decision to fire a serious, legal question about Irish travel restrictions out to Twitter just days before her flight was distinctly odd.

Some phrases have a particularly incendiary quality to them. Calm down. Has anyone ever actually calmed down while being urged to do so by someone speaking very slooooowly ?

Translation 1: You are a joyless rule-keeper who will never know life in all its glorious technicolour. Translation 2: We’re supposed to live in a free country, you wuss. I’m a bit of a maverick I am. If I die I die.

As the reopening of the economy leaves countless livelihoods in the balance, individuals carry a lot of responsibility. But for business, it’s a different level.

Last week along the quiet Dingle Peninsula, Herculean efforts by operators of B&Bs, cafes and restaurants were almost poignant to watch. The nerves. The wall-to-wall sanitiser and wipes. The hospitable B&B owner who greeted us at the door of her gleaming home and for what seemed like 20 minutes explained how she’d been told to remove all the throws, cushions and everything essential to a welcoming ambiance. The restaurant staff still functioning with grace and smiles amid unnerving new protocols. Then again, as the B&B owner put it, “one slip, one case, and the business is gone”.

To spend time among such people simultaneously trying to put on a show and salvage livelihoods is to be reminded of the stakes in this great reopening.

In a mid-April column, when I suggested that “cocooning” over-70s should be allowed to go for a walk beyond their homes, it quickly emerged that there was no law to stop them; the cocooning order was merely advice. The response to that column was powerful and heartfelt from a sector left feeling vulnerable, isolated and patronised and yet who had stoically obeyed what they believed to be the law.

So on Monday, 76-year-old Mary Kenny seemed to make a reasonable point when she suggested “there were risks in not doing anything, which could have an impact on mental health and social interactions”.

She had been deprived of a speaking gig at a Roscommon summer school due to quarantine requirements – so what does “not doing anything” mean in this context?

The guests were booked a year ago so there was plenty of time for organisers and guests to adapt and check. We all know of Irish people who had to fly from the US or the UK for a family crisis when the price was – and remains – two weeks in quarantine. It isn’t cheap, easy or natural but they did it anyway. Kenny’s description of Irish travel restrictions as “draconian” – or as we call them, desultory – also misses the mark. She could have flown into Dublin a week ago, quarantined in her residence then safely attended the Roscommon event next week.

She has enjoyed freedom of movement between her London home and Irish residence for decades, under common travel area protocols. It’s something we took for granted up to the Brexit years . But her assumption that CTA protocols would override Ireland’s right to control its borders in a pandemic is surprising, particularly so given the markedly different approaches taken by the English (not the UK) and Irish jurisdictions to Covid-19.

Her decision to fire a serious, legal question about Irish travel restrictions out to Twitter just days before her flight was distinctly odd. Google “Ireland quarantine rules” and the first hits are the official Health Service Executive site – top line: “Most people who arrive in Ireland from another country need to restrict their movements for 14 days” – and the UK government’s website. Both feature clear, authoritative information. If Twitter users were annoyed and a little shouty – particularly when some posters suggested Kenny take the back door via Northern Ireland – that was hardly surprising.

Ireland’s travel restrictions are heavy – in the letter if not in spirit – but it is no outlier. Anyone arriving in Austria from the UK without a negative Covid-19 test taken in the previous four days, must self-isolate for 14 days. In Greece – one of the great pandemic successes – arrivals may be required to take a test and undergo a period of self-isolation. Since March 16th, Norwegian borders have been closed to all but legal residents who must self-quarantine for 10 days. Finland also prohibits entry to all non-resident foreign nationals. Iceland requires all arrivals to pay for a test or to self-isolate for 14 days. In New Zealand the borders remain closed to nearly all arrivals due to imported cases.

In Ireland, we have endured pandemic loss and as yet unspoken calamities. As we re-emerge, some will be cautious and fearful and some will bound back into the “sure life is full of risks” brigade. So who was right? We know that Covid-19 is assuredly not a hoax, as Donald Trump asserted. Nor as Kenny stated – with an optimistic use of the past tense – was it the Black Death. But anyone with a sliver of sense knows that it’s not about the score. A resurgence in Europe would back us into an unimaginable place.

There is so much that we still don’t know. Let’s just take our time.

1 Covid-19 in Ireland: Colour-coded response set to replace phases
2 New Zealand considers freight as possible source of new Covid-19 cluster
3 Ireland among countries urged to consider reinstating Covid-19 restrictions
4 Brianna Parkins: My other half is trying to get me excited about spending a summer in Ireland
5 Donald Trump immediately targets Kamala Harris in campaign video
Real news has value SUBSCRIBE