St Patrick’s Day parades across the State to be cancelled 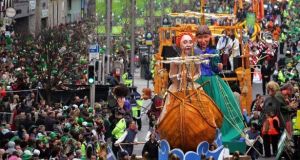 All St Patrick’s Day parades across the State are set to be cancelled, after a meeting of the Cabinet sub-committee on coronavirus.

The decision, which includes the Dublin parade, was based on the recommendation of the National Public Health Emergency Team.

In a statement the Government said: “Due to the unique nature and scale of the St Patrick’s Day festivities, in terms of size, the mass gathering of local and international travellers, and the continued progression of community transmission in some European countries, along with the emergence of a small number of cases of local transmission in Ireland, the Government has decided that St Patrick’s Day parades, including the Dublin parade, will not proceed. This is based on the advice of the National Public Health Emergency Team.”

A risk assessment, based on World Health Organisation guidelines, was carried out by the council which concluded that based on the demographic of those attending the parade and the close proximity of people attending the event, the St Patrick’s Day parade would not meet the WHO criteria.

The St Patrick’s Day parade in Minister for Health Simon Harris’s hometown of Greystones was earlier cancelled because of the coronavirus.

Municipal district chairman Cllr Tom Fortune said: “The decision was taken because we felt we should be proactive rather than reactive. We felt it was only right that we protect people who would be vulnerable to the virus.”

Greystones is also home to the Fianna Fáil spokesman on health Stephen Donnelly. The parade in Newtown, Co Wicklow, has also been cancelled.

Limerick joined other cities in cancelling its parade. The 50th International Band Championship DUR to take place on March 15th in Limerick was also cancelled.

Mayor of the City and County of Limerick Cllr Michael Sheahan said: “We sincerely regret that we have to cancel this year’s Parade and Band Championship but the health and safety of our thousands of participants, visitors and volunteers is paramount.”

“We believe they are the correct decisions based on the current situation and most recent risk assessment which considered the volume of visitors expected to Limerick city and the duration of the event.”

Councillors in Belfast have voted to cancel the city’s St Patrick’s Day parade because of coronavirus.

The Lord Mayor of Belfast, Cllr Daniel Baker, said it was “very disappointing that this year’s event won’t go ahead as planned”, but councillors had taken the decision to postpone the event “as a precaution, given Members’ and the public’s concern around coronavirus.”

Councils in Derry confirmed to The Irish Times on Monday that St Patrick’s Day parades are to go ahead as planned in both cities.

Elsewhere, Ireland’s Six Nations rugby matches against Italy and France have been postponed. Santana’s concert at the 3Arena on March 29th has also been called off after the guitarist’s group cancelled their European tour.

Trinity College Dublin has closed the Book of Kells exhibition and Old Library, the Science Gallery and the Douglas Hyde Gallery to visitors from 1pm on Tuesday.

Club rugby matches involving Italian sides in the Pro14 have also been hit. Munster’s tie with Benetton in Limerick on March 27th has been postponed in addition to their match against the same opposition in Treviso. Fixtures in Italy involving Connacht and Ulster have also been called off.

The following is a list of events that have been cancelled or postponed due to the coronavirus and this will be updated as other cancellations are announced.

Permanent Mission of Ireland to the United Nations in Geneva

Fighting Blindness has postponed its planned march to the Dáil on Wednesday for the foreseeable future.

The Square Tallaght has decided to cancel a series of special events including its upcoming family fun day on March 14th.

(Ireland vs Italy which was due to take place on March 7th was already postponed).