Simon Harris: This could go well beyond the health service 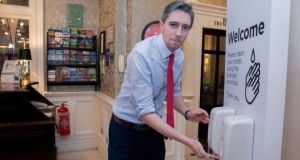 Simon Harris: “I am very confident that we have the best possible people working on this.”

The Minister for Health Simon Harris has said that he is taking seriously the advice of expert epidemiologist Professor Sam McConkey who predicted there could be between 80,000 and 120,000 deaths in Ireland from coronavirus.

Prof McConkey, the head of the department of international health and tropical medicine at the Royal College of Surgeons in Ireland, told RTÉ’s This Week programme on Sunday that coronavirus “could be like the Spanish flu, the Irish Civil War and the 1929 stock market crash all at once”.

He predicted that in the worst case scenario 80 per cent of the population or four million people in the Republic could get the disease with a death rate of between 2 and 3 per cent (80,000 to 120,000).

Speaking in advance of a special Cabinet meeting on the disease, Mr Harris said governments in the past had dismissed health advice which has been challenging and “I’m not going to do that”.

“Prof McConkey has a view and he has been clear in articulating it. He has said, and I agree with him, that this is a challenge which is going to require a whole of government and whole of society approach.

“The impact of this could go well beyond the health service, though it is primarily a health challenge. It could change the way temporarily all of us go about parts of our lives and it could impact our workplace, our schools and our families.

“I am very confident that we have the best possible people working on this and we will continue to be guided by expert voices.”

Mr Harris said the public can expect “big decisions” from the Government this week in relation to the virus. He said measures will be brought in to help vulnerable older people this week.

He said there was a “moderate to high”possibility of Ireland following Italy in having a mass outbreak of coronavirus.

He anticipated a “rapid escalation of cases” over the coming days in Ireland and the Department of Health is currently conducting a modelling exercise which was the “best guess estimate” as to how the disease might take off in Ireland. “By the end of the week we will have a projection of our best guess and our best estimate”.

Mr Harris was asked again why the Government has not announced a cancellation of all St Patrick’s Day parades in Dublin.

He said politicians would not make a “knee-jerk announcement” and that the Government would make a collective decision about St Patrick’s Day when the Cabinet meets today.

The meeting will hear from the chief medical officer Dr Tony Holohan about the risks involved in running St Patrick’s Day parades.

“I think clarity needs to be brought to this in the next 24 to 48 hours. We will follow the public health advice. As we have previously said, this is a fast-evolving, dynamic situation,” Mr Harris explained.

“I want a Government listening to public health experts. I don’t want politicians making these decisions. I want the best brains in the country giving advice to politicians and politicians following that advice.”

Mr Harris pointed out that the department published advice on its website to those organising large public gatherings.

He also defended the decision not to ban flights from northern Italy saying that countries acting unilaterally in relation to travel restrictions “will have very little effect. We live in the European Union. We need to act together on this. If we get to the change where that is necessary, we should look at it on a European level.”