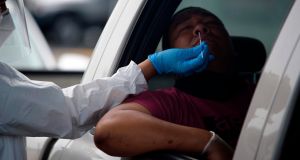 Patients are presenting with symptoms, such as cough, shortness of breath, sore throat or fever, but insisting it could not be coronavirus. Photograph: Mark Felix/AFP

Increasing numbers of people with symptoms of coronavirus are refusing to get tested for the condition, GPs have said.

Dr Nick Flynn, a senior partner in the MyCorkGP practices group, said he was seeing a “worrying trend” of people presenting with symptoms, then refusing referrals for Covid-19 tests.

“In the last two to three weeks I’ve had at least one patient a day, or two or three, who refused to go for testing,” he said.

And Dr Maitiú Ó Tuathail, GP and former president of the National Association of General Practitioners, said he had seen the same trend over the last two weeks.

Earlier this week, the State’s acting chief medical officer Dr Ronan Glynn warned that “a significant portion” of people identified as close contacts of confirmed cases “are not coming forward for testing”.

On Tuesday, he urged people with symptoms “to assume it is Covid-19 in the first instance, until a GP or test tells you otherwise”.

During the height of the pandemic a very small number would refuse a recommendation from their GP to get tested for the virus, Dr Flynn said.

Patients were presenting with symptoms, such as cough, shortness of breath, sore throat or fever, but insisting it could not be coronavirus, he said.

Many with “recurring conditions” such as a regular cough or lung diseases like COPD, were convinced the symptoms were a “flare-up” of their pre-existing health issues, Dr Flynn said.

“We can’t say that anymore, we have to rule out Covid for all respiratory symptoms until at least this time next year,” he said. Failing to do so could lead to a second peak of the virus at the same time the winter flu season hit, he said.

The public had “lost the enthusiasm” for fighting the virus and many were “at the end of their tether”, he said.

“They don’t get that this is a marathon, not a sprint . . . These people are then by definition not self-isolating,” he said.

Dr Flynn said in one case a patient presented with a sore throat, but after being told they would need to be tested for Covid-19 backtracked and said they no longer had a sore throat.

On two other occasions, people hung up the phone when they were advised they needed to be referred for tests, he said.

During the peak of the pandemic when the number of new cases was increasing by several hundred each day it was easier to “win” apprehensive patients over, Dr Flynn said.

There was a large testing backlog in March as many GP practices were inundated with calls from patients seeking referrals for testing. “We’re at the other side of that slope now,” he said.

The test involves a swab taken of the back of the throat and nasal passage, which is “an uncomfortable procedure”, the Cork GP said.

The resistance was not from a “fear of the test”, but patients’ “strongly held belief” that their symptoms were related to other pre-existing conditions, he said.

Dr Tuathail said there had been a “distinct change” in the public mindset, with people increasingly reluctant to get tested, he said. As people returned to work they did not want to self-isolate while awaiting test results, he said.

The public health messaging around the importance of testing had “waned” in recent weeks, he said.