Fears rise of Covid-19 outbreak among displaced in Idlib 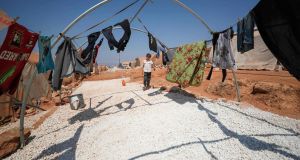 A Syrian boy in a camp for displaced Syrians from Idlib and Aleppo provinces, near the town of Maaret Misrin in Syria’s northwestern Idlib province. Photograph: Omar Haj Kadour/AFP

Three doctors and a nurse have contracted Covid-19 in Syria’s northwesternern province Idlib, raising fears of an outbreak in this rebel-held territory where hundreds of thousands of displaced people live in crowded camps.

A doctor who visited family in Turkey last month developed symptoms after infecting colleagues at two hospitals near the sprawling camps close to the Syrian-Turkish border, Al Jazeera reported.

While exposed staff have been quarantined, local crisis committee head Mohamed Hallaj told the station: “We are very worried the number of cases in the area will rise, especially [given] that all three confirmed cases were doctors who tend to interact with people on a daily basis, whether in hospitals or clinics.”

He said the virus would spread quickly in tented camps where there was little water and no sanitation.

Seven Covid-19 treatment centres have been established in northern Aleppo province and al-Qaeda-controlled Idlib, and more than 2,000 tests have been conducted so far at the sole centre equipped for the purpose. Following the identification of the initial cases, hospitals in Idlib have suspended non-emergency and outpatient services and schools have been closed.

Some three million people, half of them displaced, dwell in Idlib and adjacent areas in Aleppo and Hama provinces.

News of the virus spreading coincided with the UN Security Council vote to maintain the Bab al-Hawa crossing on the Syrian-Turkish border as the sole entry point for humanitarian aid for northern Syria.

Anticipating the need for increasing the flow of aid, the US and Europe sought to retain a second gate and reopen a third on the Syrian-Iraqi border to supply the Kurdish-held northeast. These crossings were vetoed by Russia and China, which argued importing goods without government permission violates Syrian sovereignty.

In the 70 per cent of Syrian territory held by the government, 417 Covid-19 cases and 19 deaths have been confirmed , while in Kurdish-held territory, 25 per cent of the country, six cases have been reported.

At least 700 people have died from unstated causes in two camps where the US-backed Kurdish-led forces confine 70,000 family members and supporters of the Islamic State terror group.

British citizen Ishak Mostefaoui was killed either while trying to escape or rioting in the prison where 5,000 Islamic state fighters are held in Hassakeh city. Violence has erupted in recent months due to prisoners’ fear of Covid-19 in crowded, makeshift detention centres.

Mostefaoui, who was of Algerian descent, was the first among 10 British men and 30 British women to be refused repatriation. The Kurds have called on governments to take responsibility for citizens who are a “time bomb” and should be tried by international courts set up in northeastern Syria.

Separately, the International Crisis Group, an NGO that works to prevent conflict, has called upon the US and Europe, which impose separate sanctions on Syria, to define measures the Damascus government must take to ease sanctions. It also urged the US to “expand the scope of humanitarian exemptions” that would reassure third parties they would not be penalised for providing aid to all Syria in order to avoid famine. The group said sanctions targeting the government harm “a broad majority of the population”.