Covid-19: Overseas visitors are causing ‘stress and anxiety’ in some areas, TDs say

Constituents in tourist areas are worried about perceived lack of control on travel, say Deputies 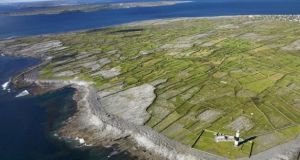 The Aran Islands: Catherine Connolly TD said ferries were arriving on the Aran Islands ‘with quite a number of passengers not wearing masks, and chaos on the quays, with nobody monitoring the situation’.

TDs from constituencies popular with tourists have spoken of “stress and anxiety” among their constituents over a perceived lack of controls on visitors coming in from overseas.

Catherine Connolly, whose Galway West constituency takes in many island communities popular with tourists, as well as the perennial hotspot of Galway city, said: “People are very worried about visitors from overseas, not just Americans, and a lack of self-isolation.”

The Independent TD said there were “certainly visitors present from overseas in Galway and on the Aran Islands”, and there were significant concerns over how some of them were handling themselves.

The “word on the ground” was that ferries were arriving on the Aran Islands from Ros a’ Mhíl and Doolin “with quite a number of passengers not wearing masks, and chaos on the quays, with nobody monitoring the situation”.

Pearse Doherty, the Sinn Féin finance spokesman and Donegal TD, said the “level of concern is high” in his constituency.

While “it’s been a long time since I’ve seen anyone from Texas in west Donegal”, constituents were raising fears with him in relation to people travelling from Covid-19 hotspots, he said.

The county often functions as a holiday bolthole for many in the nationalist community in Northern Ireland on the weekend of the 12th of July, but Mr Doherty said nervousness about that traffic was less pronounced than earlier in the year.

“Understandably there’s a level of anxiousness and anxiety with all of this [but] a lot less than at the very start; there was a bit of a panic given what was happening with Boris Johnson’s mad plan of herd immunity.”

While tour buses, a common sight on rural roads in the summer months, have all but disappeared, Mr Doherty said large numbers of camper vans were being seen parked up on beaches. “The concern is that they don’t have facilities, so they’re parking anywhere and everywhere.”

Michael Healy-Rae, the Kerry TD, said there were concerns over foreign tourists among his constituents. “We are seeing people coming in, and I know for a fact they’re not coming in through our airports in the south, they’re coming in from Northern Ireland as well.”

He criticised the State’s approach to limiting the movements of overseas visitors. “People are really worried…just fearful about what is happening at present; we have rules about wearing a mask and, at the same time, someone can come in from an infected region and there’s no checks and balances only that you have to give your name and address.”

He said he would ask any person coming into the State to observe the guidelines. “Kerry is the most welcoming part of the whole world and once we have this situation under control, we will go back to what we’ve been doing for 100 years and that is welcoming people into our county.”

Ms Connolly believes the emphasis now should be on next year’s season. “People are saying to me we make our living from tourism, but this season is gone anyway. Let’s struggle through it and keep our people safe, and open up and look forward to next year.”

It’s a view shared by her constituency colleague, Fianna Fáil’s Éamon Ó Cuív. While he said he was not receiving a huge number of representations from constituents on the matter, his view was that “this season is largely lost to foreign tourism and we’re probably better discouraging people from coming and also making sure that if they do come, they quarantine, taking the short-term pain for the long-term gain.”

Tour operators, meanwhile, say they are booking very little business amid the Covid-19 restrictions. A spokeswoman for the Irish Tour Operators Association said many members had coaches sitting in garages since last August. “With a 14-day isolation, the tour operators have no business on the books until spring of next year.

“As long as there is a 14-day self-isolation period, there’s no business being done.”

The spokeswoman said public health was the paramount concern, but that operators “would love to see a clarification on what’s the exit plan” from the current guidelines.