Coronavirus and elderly: ‘There is no point in worrying. What can we do?’ 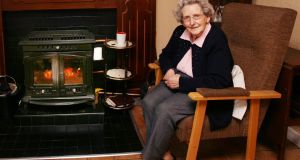 Maureen Daly at home in Arigna, Co Roscommon: “When everything clears away, I’d like to go back to the centre because we are like a big family.” Photograph: Brian Farrell

Maureen Daly from Arigna, Co Roscommon, celebrated her 94th birthday last week, but concern over coronavirus has lately kept her from her “lifeline” in the local day centre.

“I am old and I am sick and they say it’s more dangerous for those with underlying health conditions,” she says. Maureen was diagnosed with lymphoma six years ago and while she is in remission she says she has other health issues.

“When everything clears away I’d like to go back to the centre because we are like a big family and I miss them and I miss Julie. She listens to all of our problems.”

Julie Dockery is the manager of Keadue social services which operates a day centre attended by up to 20 people who get a homecooked four-course dinner in the middle of the day (bacon and cabbage is a favourite). Cook Pauline Regan also has tea and freshly baked scones or treacle bread ready when they arrive.

They also deliver dinner every day to many people in the area including former miner Pat Lynch (93). He has lived alone near Lough Allen since the death of his wife 14 years ago .

Dockery worries about the implications if the virus spreads, and services for people like Pat are curtailed.

“If the worst came to the worst we could leave it outside the house in a box but I hope it does not come to that” she says. While Pat has a son living close by who visits every day, she says some people living in isolated rural areas see no one from morning to night except the driver delivering dinner .

“I can’t tell you how many times we have discovered someone lying on the floor or someone who is ill,” she explained.

Lynch used to work in the Arigna coal mines and has “a bit of dust on the lung” but he isn’t fretting too much about the coronavirus, and says: “I’m not worried although I’d sooner not hear anything about it.”

“A lot of the men live on their own. It can be lonely. They open up a lot when they come in,” says Dockery.

“There’s always a buzz,” she says and there’s usually bingo, card games or classes in pottery and art.

Dockery has hand-sanitiser strategically placed throughout the hall and says she has been like a mother hen all week “running after people” with the sanitiser. She has also been delivering lectures about “surgical” hand washing rather than just a quick splash under a cold tap.

On Thursday morning after confirmation of four cases west of the Shannon, nobody in the centre was panicking.

“It’s getting nearer,” laughed Phil Cooney (86) from Ballyfarnan, Co Roscommon. “But there is no point in worrying. What can we do about it?” asks the regular attender who still drives.

She conceded she might stop going to “bigger towns” if Covid-19 does spread, but is adamant that for now she would not even consider staying away from Mass or funerals.

Bridie Mora, Drumboylan, also says there’s no need to overreact. “It is being blown out of proportion. There was a hullabaloo about Sars before. We have no contact outside our own little circle so for now I don’t think we should worry.”

There was a chorus of surprise when Mia Etheridge who lives in Drumshanbo admitted she was worried but hoping “common sense” would protect them.

Dockery knows how vulnerable people of a certain age can be but she knew that long before she heard of the coronavirus. Over the winter the centre lost a number of people who died after contracting flu and “succumbed to conditions like pneumonia and pleurisy”.

“So when something like this comes along, you do worry,” she says. Some of those who died this winter had been battling serious health issues but when Dockery heard that four cases had been identified in the west she thought “Oh God, now it’s getting more serious”.

Now she feels it’s “a waiting game” and all she can do is enforce whatever guidelines the HSE passes on and hope that the service can stay open.

She is heartened by the attitude of the people who attend the centre. “I have to say this group are very laid-back. They are not getting too excited.”