Placing of children in adult psychiatric unit in Limerick ‘unacceptable’ 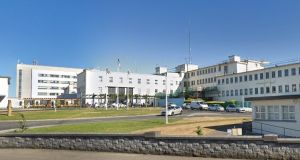 Three children were placed in an adult acute psychiatric unit in Limerick over an eight month period, the Mental Health Commission has said.

The children were placed in the unit at University Hospital Limerick because there was no suitable accomodation available elsewhere.

“The placing of children in adult units remains a totally unacceptable, but common feature of mental health care practice in Ireland,” the commission’s chief executive John Farrelly said. “The psychiatric unit at Limerick is an adult acute admission unit and, as such, is not structured or resourced to provide separate or specifically age-appropriate facilities.”

The Limerick unit is one of three identified in reports published by the commission on Friday as having been involved in “high-risk non-compliance” with regulations. The others were the St Edna’s Unit at St Loman’s Hospital, Mullingar and the Maryborough Centre at St Fintan’s Hospital, Portlaoise.

Not all staff were up to date or had been trained in mandatory training in fire safety, basic life support, prevention and management of aggression and violence, and the Mental Health Act 2001, the reports found.

In relation to the acute psychiatric unit in Limerick, the commission noted that the high observation unit, which contains a seclusion room and eight single bedrooms, was out of commission at the time of inspection.

“This area has never been operational and there are no plans to open it in the immediate future. This affects the availability of space and accommodation for residents in the main approved centre,” the report noted.

It also noted that the main sitting room in the unit was bare and stark in appearance, and was a thoroughfare to the outdoor area where residents could smoke.

“The sitting room smelt of smoke as the adjoining door to the smoking area was often left open. The main sitting room of the approved centre was cold. The premises was unclean in some areas - particularly the fridge and the sink in the pantry.”

One outdoor area contained litter such as cigarette butts, one toilet was malodorous, and plant beds in all of the gardens were overgrown with weeds.

In relation to St Edna’s, the report noted that there was evidence of exposed wiring, broken doors, and cracked ceiling glass.

“The corridors in St Edna’s ward were noticeably cold. Some furnishings were worn and in a poor state of repair.”

In relation to the Maryborough Centre, the report noted that, while there were problems with some aspects of its operation, compliance with regulatory requirements had improved over the past three years, from 64 per cent in 2017, to 83 per cent last year.