We are in coronavirus-land now, and all is changed utterly

Covid-19 has landed on our shores, but has the penny dropped about what we’re facing?

The World Health Organisation has warned governments that "this is not a drill" as coronavirus infections near 100,000 worldwide. 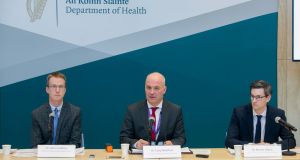 Things move fast in coronavirus-land. Ten days ago, Ireland was feeling pretty satisfied with itself as the disease remained a faraway threat, overseas; today, we have cases on both sides of the Border, person-to-person transmission, cases among health staff, even an unexplained case.

Around 3pm on Thursday, a senior HSE official was predicting the virus would be circulating in the community “within weeks”; but just hours later, we learned from tests that it already was, and in a hospital filled with compromised patients.

You can write the next stage in the sequence yourself. Most with the disease will recover, but it will not be long before the first Irish patient dies from coronavirus.

And yet none of this has come as a surprise to the experts, nor should it to the public. Diseases spread; they kill. The flu alone has killed more than 100 patients this winter, and this disease may be up to 30 times more lethal.

But the new coronavirus is even better at spreading than killing. In little over two months, it is already 12 times the size of the Sars outbreak almost 20 years ago. St Patrick may have banished our snakes, but nothing was going to stop the disease coming here, eventually.

Eventually. That’s a key word. The longer we could hold off importing the disease, the better we could survive an outbreak. The more time passed in a phony war phase with no cases, the more experts learned about the virus, the closer a vaccine is (don’t hold your breath just yet) and the nearer is the warm weather that might – just might – blow the threat away.

We did well for a while. Sixty countries succumbed to the virus while Ireland enjoyed the luxury of chat-show discussions about proper handwashing and patient confidentiality, and theorising about its possible effects. Now, though, the phony war has been replaced by trench warfare, with health staff in the frontline and all of us facing massive disruption to our lives.

This is where it gets really worrying. Within days, two hospitals have been crippled by the arrival of the virus in their corridors. Dozens of staff who may have been exposed have been sent home. Surgeries have been cancelled, visitors banned. Maybe it is just a coincidence that Cork University Hospital and University Hospital Limerick also have the worst emergency department overcrowding. Or maybe this illustrates the potential lack of resilience in an Irish health system that is already bursting at the seams.

If avoiding the disease was never an option, there are still two roads we can travel. One leads to isolated cases that are quickly identified and contained. The disease probably runs out of energy and eventually goes away or mutates into something harmless.

The other is the Italian scenario, where the virus gets a grip on a population before anyone really knows what’s going on. By the time it is identified, it has established itself in multiple locations and is virtually uncontrollable. It may eventually die away – it seems Italy may, with China, have already passed the point of peak Covid-19 – but not before wreaking massive damage.

The concern today is that Ireland may turn out more like Italy – with its current total of almost 4,000 cases – than, say, Canada, with 46, or Denmark, with 10. The infected patient in Cork may have spent up to a week in and out of the health service with the disease before he was diagnosed, and at this point we don’t know where he got it. Likewise, the healthcare professional who picked up the virus on an Italian skiing holiday worked across the health service before he was diagnosed.

A recently published Lancet analysis of cases in China showed outcomes improved with better health provision; the death rates in the more developed cities of China, for example, have been much lower than in the remoter provinces.

In Ireland, we already know hundreds of people die each year due to trolley waits. It seems likely the burden of coronavirus will be magnified by the problems of the health system – the long waits for treatment, the lack of intensive care beds, etc.

“Most countries will struggle if they start to see large numbers of patients requiring intensive care,” Dr Mike Ryan, the Irishman leading the World Health Organisation’s emergency response to the crisis, said during the week.

Many patients end up spending up to 25 days in critical care, he pointed out. “That’s occupying a lot of beds for a very long time. So I think all countries are going to have to think very carefully about how they manage the critical care component of this disease.”

A month ago, infectious disease expert Prof Sam McConkey told this writer the virus could kill up to 20,000 people in Ireland in a worst-case scenario. He warned the Government needed to prepare for an event like the Spanish flu of a century ago, which killed more than 50 million people across the world.

It was doom-laden stuff, but McConkey isn’t resiling from it today. “This is going to hit us like a tsunami,” he warns. “It’s a once-in-a-hundred-year event that will kill more people than the Civil War we’re commemorating this year did a century ago.

“And yet the penny hasn’t dropped. There’s a lack of realisation about what’s happening.”

So far, our public health doctors have excelled in communicating the threat we face, ramping up testing facilities, assessing the hundreds of suspected cases that have arisen and tracing the contacts of early confirmed cases.

However, the latest slew of cases suggests flaws or gaps in the approach taken. Another Lancet study based on Chinese data says more than 70 per cent of contacts of confirmed cases have to be traced in order to control most outbreaks. The delay between the onset of symptoms and isolation is the biggest factor in determining whether the outbreak can be controlled.

“I do not think it is possible to guarantee that 70 per cent contact tracing can be achieved in Ireland, and failures in this area could have disastrous consequences,” said Dr Paul O’Brien, an Irish regulatory expert based in China. “If our current ‘contact tracing only’ strategy continues, we will inevitably see community transmission of the virus very soon.”

Days after he wrote this critique, community transmission was uncovered when the Cork patient tested positive.

O’Brien says the most effective mitigation strategy Ireland could have adopted would have been to reduce the risk of infection to zero. “Early adoption of a proactive strategy involving risk-stratified mandatory quarantine of all inward travel from high-risk zones could have made this [the avoidance of panic] a non-issue for Ireland.”

Effectively, given nearly all our cases have originated in Italy, this means banning flights from that country, though O’Brien suggests a 14-day quarantine on inward travel from high-risk regions as an alternative.

Officials have argued against such travel restrictions, saying travellers might simply fly in from a different country. There is no appetite in the EU for restrictions that might impede the free movement of people or lead to tit-for-tat measures.

“You have to strike a balance. The research shows your economy drops by as much as half once your close a border. Taking an action that makes you 50 per cent poorer is not a good solution,” says McConkey.

In any case, arguments about limiting travel from Italy are probably moot now. “If you were talking about restricting people come from areas with community transmission you’d have to include the UK. And very soon, us, since it’s now happening here,” says McConkey.

So what to do now? McConkey feels “we may end up copying the Chinese”. Up to 5,000 public sector workers should be re-allocated to the job of tracing contacts, he says, while the Government needs to draw up robust contingency plans to keep essential services running. Schools and colleges need to use IT to keep classes going online when they have to close, and AI could be deployed to help trace contacts of confirmed cases.

“The real question is how quickly you catch up. Do you realise the situation you’re in and can you catch up quickly?”