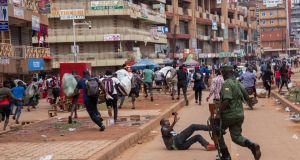 The 5am darkness filled with distant wails, at first sounding like a ghostly wind. Then the clattering and shouting grew louder.

Across Gulu, a lively northern Ugandan city with a troubled past, locals were running through circular grass houses and rectangular brick homes, hitting pots and pans. Many threw their doors open, screaming and crying, the noise travelling as more joined in.

They were following a directive announced on the radio the day before, which had originally come from the cultural leader of the Acholi tribe. It was necessary to carry out ryemo gemo – “chasing the devil”, the order said. This time, the devil was coronavirus.

“It reminds me of a war,” said one Ugandan, listening to the sounds echoing around. “I haven’t heard that in a very long time. They used to do like that when the rebels were coming.”

Northern Uganda has been through decades of conflict, ending more than decade ago. Roughly half a million people were killed, two million displaced and tens of thousands of children kidnapped and made to fight with the Lord’s Resistance Army rebel group, led by the infamous Joseph Kony. In the middle came an Ebola outbreak, which has people still fearful of disease. Coronavirus has reminded residents of the restrictions then.

During the war, Gulu was a centre for the displaced, who thronged the streets after fleeing villages where they feared attacks by rebels known for their viciousness and cruelty. Now, in the time of coronavirus, movement is going in the opposite direction. People are anxious to have their children and elderly relatives in rural areas.

During a national address on Monday night, Ugandan president Yoweri Museveni announced a host of new rules, saying it was better to take “the bitter medicine of maximum restrictions for a limited time” than to run the risk of Covid-19 spreading further.

The restrictions included a ban on private transport for at least 14 days. The president – who was late starting his speech – gave Ugandans one hour to get home before transport would be prohibited. “A longer time would give people time to try and go to the villages,” he said. “In so doing they may transfer the very sickness we are trying to prevent.”

Museveni also said politicians who “try to distribute food for cheap popularity” would be charged with “attempted murder” for creating a situation where crowds gathered and disease might spread. In recent days, volunteer-led crowdfunding initiatives have raised thousands of euro to buy food for people in Uganda’s slums – efforts now at risk.

Then again, they want us to sleep in the market. They want coronavirus to kill us

All shops not selling food or medicine would be closed, Museveni said, and sellers must sleep at their stalls rather than risk further movement.

On Tuesday afternoon, vendors streamed out of Gulu’s main market to make it home before the new 7pm curfew. No one seemed to follow the other new rules.

Lanyero Agnes, who sells onions and potatoes – which are nicknamed “Irish” in Gulu – said she had four children under 15 who were alone during the day. She was worried her children could be attacked by thieves at night, and frightened the same could happen to her in the market.

There were too many mosquitoes there, the toilets were disgusting and there was no way for people to wash, she said. “They’re saying that each and everybody [should] be four metres [apart], then again they want us to sleep in the market. They want coronavirus to kill us.”

Patrick Onaya, the chairman of Gulu City Market Vendors’ Association, called the instruction “very impossible”. There were approximately 15,000 vendors working in markets across Gulu, including 4,000 in the main market, he said. “I’m so worried about what could happen.”

Odida Alphonse, who usually sells secondhand belts, was ordered to shut up shop completely. He sat in a chair at the edge of the street, watching police shuttering other businesses. “They were not beating people,” he said, with obvious relief.

Alphonse was thinking of his six children, aged between five and 20, and wondering if his small savings could stretch for the next two weeks. “I don’t know what might happen next but I’m thinking most people will begin starving,” he said. “The majority of people who stay in town live hand to mouth.”

1 All students will not return to school even if social distancing rules are relaxed - McHugh
2 Emily Maitlis thanks BBC viewers for support after Cummings row
3 The human cost of Covid-19: new figures reveal the toll on Ireland's care homes
4 ‘Stick to the guidelines’ - People warned not to gather in crowds as sunny weekend approaches
5 Miriam Lord: Taoiseach is trapped in a Zoom session from hell
Real news has value SUBSCRIBE