Communicorp cuts pay by up to 25% at its radio stations

Pay cuts due to Covid crisis but no plans for job cuts, Newstalk and Today FM owner says 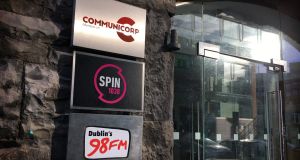 Communicorp has informed employees at all its stations that is introducing pay cuts because of the impact of the coronavirus pandemic on its business.

The owner of the country’s largest independent radio stations including Newstalk and Today FM is to cut staff wages by up to 25 per cent as a result of the Covid-19 crisis.

Communicorp, which is owned by businessman Denis O’Brien, has informed employees at all its stations that is introducing pay cuts because of the impact of the coronavirus pandemic on its business.

However, it is understood the company has no plans for any redundancies as part of the measures announced on Tuesday.

The media group also owns a number of other radio stations including 98FM, Spin 103.8 and Spin South West.

Communicorp made no official statement about the cuts and has declined to comment on what it said were staff matters.

The changes are to be implemented across the board on all employees in all stations.

It is believed the pay cuts will be implemented for a period of three months but that no job losses are planned, while salaries are expected to be returned to previous levels once normal business and revenue is returned.

Staff were told they would be given an update on the group’s position on June 15th.

One source within the group said staff were not totally surprised at Tuesday’s announcement as there was a feeling there would be some pay cuts due to the fall-off in advertising revenue in the past fortnight.

The employee said some workers were annoyed that they were being asked to take a drop in salary given they were working harder than ever to put out accurate information during the crisis.

“When you’re seeing potentially 500,000 people losing their jobs entirely, it’s hard not to be grateful we still have ours even at reduced pay,” the source said.

However, they added: “The worry if this goes on for longer than people expect is what that means for pay not being restored or job losses in the future.”