Coronavirus: Government may ease restrictions in stages from May 5th 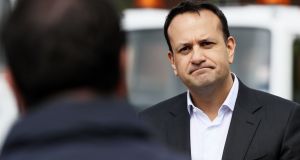 Taoiseach Leo Varadkar speaks to the media during a visit to Civil Defence headquarters in Dublin on Monday. Photograph: Brian Lawless/PA Wire

Restrictions introduced to deal with Covid-19 may be eased in stages every two to three weeks if efforts to tackle the virus are successful, under plans being considered by the Government.

However, well-placed sources said any easing of restrictions at the end of the current period of the lockdown on May 5th would be very limited.

Ministers and officials are working on a plan to ease restrictions but there is anxiety within the Government about acting too hastily and then having to reintroduce strict measures.

The first phase of restrictions to be lifted will be “very, very limited” said one source, who added that even returning to the measures that were in place before an effective lockdown was introduced on April 12th may be “too drastic”.

Speaking on RTÉ’s Prime Time on Tuesday night, Taoiseach Leo Varadkar said the Government would outline its plan before May 5th and it would be considered by Cabinet by the end of April. He said he hoped to ease restrictions after May 5th but did not want to give false assurances.

He said the plan would lay out “in different steps” how the economy and society would be reopened.

“I think everyone understands it won’t be done in one go, in one fell swoop,” he said.

In advance of any such move, the Government on Tuesday announced it was extending a ban on mass licensed gatherings of more than 5,000 people until the end of August, giving event organisers notice that concerts and other festivals were off for the summer.

Although the move did not strictly apply to sports gatherings, numerous Ministers said events such as the All-Ireland football and hurling series would not take place this summer.

“It will become quite clear that they can’t go ahead,” said one Minister.

On the back of the announcement, the Galway Races announced its public meetings would not go ahead, while the Football Association of Ireland sought clarity from the Government on soccer fixtures.

The National Public Health Emergency Team (NPHET) on Tuesday night said that more than 9,000 people in Ireland who tested positive for Covid-19 had successfully recovered from the disease.

The deaths of another 44 patients – 18 males and 26 females – diagnosed with Covid-19 had been reported on Tuesday by NPHET.

There have now been 730 Covid-19 related deaths confirmed by laboratory tests in the Republic. However, a further 108 probable or suspected deaths in care settings was reported by NPHET on Tuesday.

It is understood that an option being considered by the Government is an easing of restrictions every two to three weeks after a possible initial easing off from May 5th. This would allow for an assessment of how any changes were affecting the spread of the virus.

Some easing of cocooning measures for the over-70s, as well as the re-opening of DIY stores, are seen as the likeliest options for the first wave, as well as clarity on how schools could partially reopen. People may also be allowed travel further to exercise, it was suggested.

Ministers attending Tuesday’s Cabinet meeting said there was general anxiety about moving too quickly and having to re-introduce restrictions, as well as worry about a potential second wave of Covid-19.

Although a gradual easing every two to three weeks was seen as desirable, one senior source said it was highly likely that people would be told at some point over the summer that a hoped-for lifting of restrictions would not go ahead because of insufficient progress in tackling the virus.

The majority of Ministers at Cabinet on Tuesday were said to be in favour of a cautious approach.

As discussion continues on North-South co-operation, Mike Tomlinson, emeritus professor of social policy at Queen’s University Belfast writes in Wednesday’s Irish Times: “It is reasonable to assume that the North’s higher death rates result from lower rates of testing, the lack of contact tracing and the slower application of lockdown measures compared with the Republic.

“The evidence underlines the case for co-ordinated action across the island to hunt down the virus through high levels of testing and contact tracing and for stronger public-health surveillance at points of entry.”