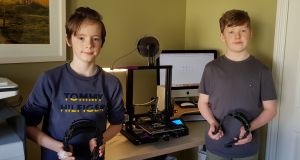 Daire and ConorJean with their 3D printer which is generating face masks for healthcare workers.

An army of people is responding to pleas for personal protection equipment (PPE) for healthcare workers but a small production line for face masks set up by two boys in their Co Kildare home is perhaps the most remarkable illustration of that endeavour.

While major labs and manufacturing plants around the country are leading the response with the help of teams of scientists and engineers, Conor (14) and Daire (11) Jean from Celbridge, armed with just their 3D printer and a stack of laminating pouches, completed their first batch of 100 face masks at the weekend.

Having got up at 7am on Monday, they are now well into the second batch for Tallaght University Hospital (TUH) and will continue production for as long as there is a need for masks there or elsewhere, according to Conor.

They even have incorporated new design features so they can be worn more easily by a doctor or nurse wearing glasses or goggles.

That first batch was the culmination of working extremely long days for the past fortnight with many blips along the way.

When they got the production line running smoothly and the first batch completed, their mother, Lorraine Duffy, tweeted a picture of them with the consignment and the following message: “Couldn’t be prouder of these two boys today. They have spent 15 hrs a day for the last 2 weeks 3d printing PPE visors for Frontline staff @ #TUH. 101 ready 2go. The next 100 started already.”

The idea stemmed from a tweet by RTÉ journalist Ciara Ní Bhroin who noted her husband, Greg Keeley, who works in the film industry, had a string of 3D printers in their living room making PPE with the help of colleagues.

They got in touch with him and he has been mentoring Conor and Daire through the process ever since. The technology is being deployed in the house from 7am to 11pm. “It might give you a migraine . . . but it’s all for a good cause. When they hit their first 100, they were thrilled to bits,” their mother said.

Keeley had taken the boys under this wing, she added, by providing code and files to perfect their manufacturing process. Emailing pictures of the latest progress has helped perfect technique.

“We email him nearly every day. He has helped us get over some problems,” said Conor, who is a second-year student at Celbridge Community School; his brother is in fifth class at North Kildare Educate Together School.

Daire has a twin, Cormac, who has an artistic streak and was more interested in entering The Irish Times children’s art competition with its theme of enforced isolation due to Covid-19, their mother explained.

Keeley paid tribute to the boys’ fantastic efforts. “They are doing great. Fair play to them. I wish I had a 3D printer when I was their age – it’s a different world,” he added.

Making models and props for the film industry using 3D printers is his job. With colleagues from the Model Makers Guild of Ireland and a 3D printing supplier, they wanted to make a contribution to the national effort, and now have a team of four making face masks in their homes and have production of up to 1,000 face masks a week.

They are going to a lot of places including TUH and St James’s Hospital in Dublin. Of late, they have shifted focus to supplying nursing homes because of acute PPE shortages there.

He and a colleague set up a GoFundMe page with a view to raising €5,000 to help pay for the group’s raw materials. They have raised more than €6,700 in a few days to keep operations going.