Chief Medical Officer Dr Tony Holohan has said that an evaluation will be made towards the end of April as to what might happen with regard to lifting Covid-19 restrictions from May 5th. Video: RTÉ 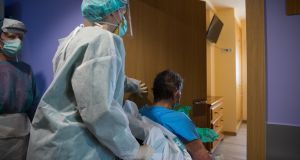 Nursing and other long-term residential facilities now account for almost 60 per cent of virus-related deaths, according to the figures released by the National Public Health Emergency Team. Photograph: Alvaro Calvo/Getty

One in five residents of nursing and other care homes believed to have died of Covid-19 were never tested for the disease, new figures reveal.

Nursing and other long-term residential facilities now account for almost 60 per cent of virus-related deaths, according to the figures released by the National Public Health Emergency Team (NPHET).

Of the 406 deaths linked to care homes, 77 are classified as “probably or suspected” and were not confirmed by laboratory tests, according to a breakdown provided for the first time by NPHET.

Nursing homes specifically account for almost half of all deaths in the current outbreak – 337 out of 687 total cases, of which 61 have now been classified as probable or suspected.

Amid widespread concern over possible under-reporting of care home deaths, a census of mortality in the sector is continuing. Public health officials said there had been a very high response rate and the results, expected later this week, could inform future clinical actions.

Once again defending the official response in relation to the spread of the virus in care settings, chief medical officer Dr Tony Holohan said on Monday night it was “not realistic to think we could keep it out of homes” given how transmissible Covid-19 was.

Meanwhile, the number of patients attending hospital emergency departments has fallen by as much as 75 per cent, new figures released by the Health Service Executive show.

The number of attendances dropped by 32.4 per cent in March, compared with the same month last year, and by 45 per cent in the first two weeks of April, figures supplied by the HSE to The Irish Times show.

The biggest fall – over 75 per cent – was at St Michael’s Hospital in Dún Laoghaire, while Temple Street children’s hospital saw attendances drop 64.4 per cent.

Responding to the figures, Minister for Health Simon Harris warned the health system would be dealing with “a second legacy” of untreated and undiagnosed chronic illnesses arising from the Covid-19 pandemic, if people continued to avoid going to hospital when they needed to go.

It was “almost unimaginable” there were nearly 2,000 vacant beds in the public hospital system at present, he said. “There is a real fear that we may be dealing with the fall-out of Covid-19 for months to come – not just cases of the virus but with delayed diagnosis and treatment.”

A total of 77 deaths of patients diagnosed with Covid-19 were reported on Monday, by far the highest daily amount recorded so far.

However, these deaths actually occurred on 17 different days this month, with the highest single number occurring on April 18th, Dr Holohan clarified.

The overall trend in terms of new confirmed cases and ICU admissions was downward, he said.

The number of patients in ICU is 152, continuing a gently declining trend seen over recent days, while 109 patients have now been discharged from intensive care.

On Monday, the HSE took over a Co Louth nursing home dealing with a coronavirus outbreak. The RCSI Hospital Group said it had taken over operational management of the Dealgan House nursing home in Dundalk, which accommodates 63 residents.

Dr Holohan said further progress in reducing the number of cases and ICU admissions would be needed over the next 10 days before an evaluation would be made as to whether restrictive measures could be eased.

“We need to take every step we possibly can” to continue dampening down the infection. “There is no room for complacency, or for taking the foot off the gas.”

Dr Holohan declined to say when pubs might open but pointed out that their environment was “almost at odds” with the challenge of maintaining social distancing.