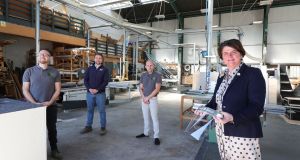 First Minister Arlene Foster at Dougan Contracts in Bangor where staff are producing Covid-19 masks: “Now is not the time to take our foot off the pedal.” Photograph: Kelvin Boyes/Press Eye/PA

Nine more people with coronavirus have died in hospital in Northern Ireland, the North’s Department of Health (DoH) reported on Tuesday.

It brings the total number of coronavirus-related deaths in hospital to 216.

Figures from the Northern Ireland Statistics and Research Agency, which include deaths in all settings including care homes and hospitals, show the number of fatalities up until April 10th was at least a third higher.

Speaking at the daily press briefing on Tuesday, First Minister Arlene Foster said that while work was under way to “map out a path to recovery”, recovery would be “graduated”.

“Now is not the time to take our foot off the pedal or indeed return to our pre-Covid routines,” she said.

She said “We must all face the reality that when the initial threat recedes and the first wave of this pandemic is over it will not be business as usual.

“Everyone in a position of responsibility in the public and private sectors needs to prepare for a new normal.”

Meanwhile divisions have emerged again in the North’s Executive over calls to reopen council-run cemeteries, which have been closed since last month in order to prevent the spread of coronavirus.

The DUP and UUP support reopening cemeteries with social distancing measures in place, while Sinn Féin and Alliance are opposed. The SDLP leader, Colum Eastwood, has written to the North’s Minister for Health, Robin Swann, requesting the latest medical and scientific advice.

Any decision to reopen cemeteries would require a change in the coronavirus regulations which would have to be decided on by the North’s Executive.

Ms Foster said there would be further discussion of the matter at Executive level.

“My view is clear. I think we should allow circumstances limiting the visiting hours and making sure that social distancing is in place,” said Ms Foster, adding that she recognised others had “justifiable concerns”.

Deputy First Minister Michelle O’Neill said she recognised the sensitivities around the closure of cemeteries but the restrictions were in place “to do right by people and to save lives”.

The police in Northern Ireland revealed they received 3,787 reports of people not adhering to social distancing measures in the six days since a webpage for reporting breaches was launched on April 10th.

“A number of the reports relate to people not following guidance but not necessarily a breach of the regulations. For example, where the reporting person believes a person jogging on a path is coming closer than within two metres of another person, or where a person is exercising more than once a day.”