Coronavirus deemed of ‘international concern’ by WHO 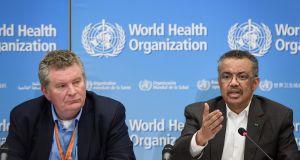 The World Health Organisation has declared the coronavirus outbreak that started in China a public health emergency “of international concern”.

The decision by the WHO’s emergency committee was not unanimous and the organisation is not recommending further limiting trade and movement of people.

The decision should not be taken as a vote of no confidence in China and the measures it has taken, WHO director general Dr Tedros Adhanom Ghebreyesus said when announcing the escalation of the crisis at a press conference in Geneva on Thursday evening.

The WHO's decision was taken as the number of confirmed cases jumped to 9,320, with the vast majority in China. So far, 212 people have died from the virus, which originated in Hubei province in December.

The WHO held back from declaring a global emergency last week, but since then cases have been reported in 18 countries, including at least 10 cases in Europe.

At a briefing in Dublin on Thursday, Health Service Executive officials repeated their view that the risk of coronavirus cases occurring here remains moderate and Ireland is well-prepared for any outbreak.

There have been no confirmed or suspected cases of the virus in Ireland.

However, Prof Nigel Stevenson, an immunologist at Trinity College Dublin, said Ireland needs to start screening passengers arriving into the country and to make quarantine preparations.

The Government must ensure it is not “complacent” in the face of the threat posed by the virus, he said.

Prof Stevenson said it was very unlikely the virus would spread in Ireland and there was no reason for a “freak-out” about the situation.

Ireland is lagging far behind other countries in relation to isolation facilities to protect against threats such as Sars and the new coronavirus, she said.

From next week, testing facilities for the new virus will be available in Dublin.

The Department of Foreign Affairs said its embassy in China was in ongoing contact with Irish citizens in Hubei province, “regarding their intentions” for evacuation.

“Only a small number have indicated an interest in leaving Hubei province, and arrangements are being put in place to assist them in this regard.”

Three Irish citizens will be evacuated out of Wuhan early on Friday on a flight arranged by the British government for its nationals.

Ireland and many other countries have advised their citizens to avoid non-essential travel to mainland China, and more than 30 airlines, include British Airways and Lufthansa, have suspended or cut back flight services.