Could coronavirus become a Sars-like illness?

A Doctor Writes: Person to person transmission of virus raises fears about it spreading 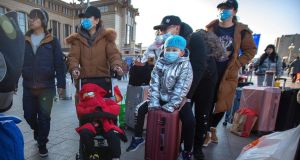 Travellers wear face masks as they walk outside Beijing Railway Station amid a sharp rise in the number of people infected with a new coronavirus. The outbreak coincides with China’s busiest travel period, as millions board trains and planes for the Lunar New Year holidays. Photograph: Mark Schiefelbein/AP.

Confirmation that a new coronavirus can be transmitted directly from person to person has significantly increased the possibility of a Sars-like illness spreading around the world.

The virus, known as 2019-nCoV, has killed six people in China so far. More than 224 have been infected, and cases have now been identified in Thailand, Japan and South Korea. A suspected case is under investigation in Brisbane, Australia. On Tuesday, US officials confirmed that a traveller from China had been diagnosed with the virus in Seattle.

Coronaviruses cause a variety of mild to moderate upper-respiratory tract illnesses, including the common cold. But two previously identified coronaviruses, MERS-CoV and SARS-CoV, cause severe symptoms. MERS- CoV was identified in the Middle East and spread from camels to humans.

Severe Acute Respiratory Syndrome (Sars) emerged in China in 2003, when the virus jumped from civet cats to humans.

Coronaviruses in humans usually spread from an infected person through the air via coughing and sneezing, touching or shaking hands, touching a surface exposed to the virus and then making contact with the eyes, nose or mouth.

According to the World Health Organisation (WHO) common signs of coronavirus infection include fever, cough, shortness of breath and breathing difficulties. In more severe cases, infection can cause pneumonia, severe acute respiratory syndrome, kidney failure and even death.

So far, the cause of the current outbreak, 2019-nCoV, does not appear to be as deadly as Sars, which emerged from China’s Guangdong province. That outbreak left 774 people dead out of some 8,098 people who became infected.

Sars spread well beyond Asia; some 438 Canadians were diagnosed with probable and suspected cases of Sars. It was a sharp reminder how quickly modern air travel can spread microbes.

In Ireland, just one case of Sars was confirmed. However, it triggered a substantial mobilisation of public health resources and impacted the Special Olympics, which were held here in 2003.

There are a number of concerns about the timing of the latest coronavirus outbreak as we are on the cusp of the Chinese Lunar New Year celebration, which sees hundreds of thousands travel for a week’s break – creating ideal conditions for an accelerated spread of the virus. In addition, the northern hemisphere is in the middle of a busy influenza season.

It means emergency departments are already full with people experiencing symptoms that are similar to those of the novel coronavirus, something that will undoubtedly add to the diagnostic challenge.

And then there are some important “known unknowns”: How deadly is 2019-nCoV? The death rate from Sars was 3 to 4 per cent, some three times the death rate of regular influenza.

Death by severe coronavirus infection is usually by respiratory failure – the victims’ lungs are overwhelmed by pneumonia to the point where mechanical breathing assistance is required.

A fatal outcome is more likely among those who already have a chronic health condition. Other issues include how easily the virus is spread from person to person and the proportion of those infected who develop severe rather than mild symptoms.

On the positive side, scientists have already developed a test for the new virus and have identified its typical symptoms. And the 2019-nCoV virus does not appear to be as deadly as Sars was.

The WHO is due to hold an emergency meeting on Wednesday which will determine whether the growing outbreak constitutes a public health emergency.