Coronavirus cases may be tens of times higher than previously thought, study says 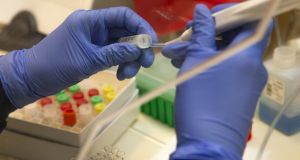 A new study in California has found the number of people infected with coronavirus may be tens of times higher than previously thought. File photograph: Karen Ducey/Getty Images

A new study in California has found the number of people infected with coronavirus may be tens of times higher than previously thought.

The study from Stanford University, which was released on Friday and has yet to be peer reviewed, tested samples from 3,330 people in Santa Clara County and found the virus was 50 to 85 times more common than official figures indicated.

To ease the sprawling lockdowns currently in place to stop the spread of Covid-19, health officials must first determine how many people have been infected. Large studies of the prevalence of the virus within a region could play a key role, the researchers involved in the study say.

“This has implications for learning how far we are in the course of the epidemic,” said Eran Bendavid, associate professor of medicine at Stanford University, who led the study. “It has implications for epidemic models that are being used to design policies and estimate what it means for our healthcare system.”

The study marks the first large-scale study of its kind, researchers said. The study was conducted by identifying antibodies in healthy individuals through a finger prick test, which indicated whether they had already contracted and recovered from the virus.

At the time of the study, Santa Clara County had 1,094 confirmed cases of Covid-19, resulting in 50 deaths. But based on the rate of people who have antibodies, the study found it is likely that between 48,000 and 81,000 people had been infected in Santa Clara County by early April – a number approximately 50 to 80 times higher.

That also means coronavirus is potentially much less deadly to the overall population than initially thought. As of Tuesday, the US’s coronavirus death rate was 4.1 per cent, and the Stanford researchers said their findings show a death rate of just 0.12 per cent to 0.2 per cent.

The study has been interpreted by some to mean we are closer to herd immunity – the concept that if enough people in a population have developed antibodies to a disease that population becomes immune – than expected. But the researchers behind the study said not to jump to conclusions or make policy choices in regard to the findings until more research has been done.

The study confirms the widely held belief that far more people than originally thought have been infected with coronavirus, said Arthur Reingold, an epidemiology professor at UC Berkeley who was not involved in the study. However, it doesn’t mean shelter-in-place orders will be lifted any time soon.

“The idea this would be a passport to going safely back to work and getting us up and running has two constraints: we do not know if antibodies protect you and for how long, and a very small percentage of the population even has antibodies,” he said.

It is also unclear if the study, conducted exclusively on residents of Santa Clara County, is representative of the rest of the US, researchers said.

“It is absolutely critical that similar studies be done all around the country,” said Jayanta Bhattacharya, a professor at Stanford and author on the study. “It’s very clear that the virus is more prevalent in some areas than in others, and understanding the prevalence of viruses in each region is a critical step forward to making some policy.”

Other large-scale sample studies are currently under way in the US. The National Institutes of Health is testing 10,000 people. UC Berkeley is going to test 5,000 healthy volunteers to see if they have, or have ever had, the coronavirus. – Guardian