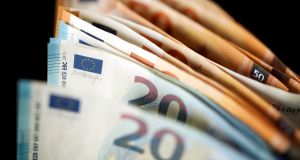 About a quarter of employers in the State have registered for the temporary wage subsidy programme to help retain staff in jobs during the coronavirus outbreak. Photograph: Benoit Tessier/Reuters

Almost three-quarters of employers have yet to register for the temporary wage subsidy programme to help retain staff in jobs during the coronavirus outbreak.

Figures published by Revenue on Friday show that about 45,100 employers have registered with tax authorities under the scheme that will see the State pay up to 85 per cent of employee wages during the Covid-19 crisis. That amounts to about a quarter of businesses in the State.

Many of them have only applied in recent days, with just 30,800 companies having received payments from the State to date for their staff.

The scheme pays up to 85 per cent of an employee’s wages, a figure that can be topped up by employers who choose to do so.

Revenue said its figures showed that over 281,200 workers had benefited from the scheme so far. It said it had paid out €300 million to date under the scheme, including €26 million in income tax refunds.

A Revenue analysis of those paid weekly found that 82 per cent of active claimants were having their State subsidy topped up by their employer.

The Minister for Finance Paschal Donohoe announced significant changes in the scheme this week – which pays up to €410 a week – amid reports that low-paid and part-time workers were choosing to avail of the flat €350 payment under the pandemic unemployment scheme rather than stay in the jobs on the basis that it would pay them more.

“If you take the numbers of employers that have actually availed of the scheme, that’s actually a low percentage of the number of employers in the country,” said Marc O’Dwyer, chief executive of accounting software group Big Red Cloud.

“I think Government must be disappointed with the take up and the tweaks in the scheme [this week] are very telling.”

An analysis by Ulster Bank economists Simon Barry and Ricardo Amaro finds that workers in hospitality, retail and construction have dominated the take-up in the two Government schemes.

They said that workers in primary agriculture – including areas like fruit-picking – and ICT are the areas least affected.

In a briefing for 550 tax specialists on Thursday, Revenue officials said higher earners can apply immediately to avail of the amended Covid-19 wage subsidy scheme.

The officials said people who had, until now, been ruled out because their pre-Covid pay topped €76,000 per annum could apply with immediate effect for income support under the scheme if their gross income was now below that level. The new, enhanced payments come into effect from May 4th.

Tax officials also advised that people in receipt of the temporary wage subsidy can avoid a retrospective tax bill at the end of the year by contacting the tax office now and asking for their tax credits to be applied on a weekly or monthly basis.

They said the request would have to come through Revenue’s MyAccount online service for personal tax customers.