Coronavirus: 36 new cases confirmed but no further deaths in the State 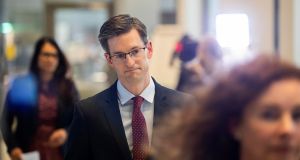 There have been no further deaths of people with Covid-19 and 36 new confirmed cases in the State, the National Public Health Emergency Team (NPHET) has said.

Tuesday’s figures brings the total number of confirmed cases in the Republic to 25,802, while a total of 1,753 Covid-19 related deaths have been recorded.

Over the past week, 51,128 tests were carried out, with 139 tests coming back positive, giving a positivity rate of 0.27 per cent.

Dr Ronan Glynn, acting chief medical officer at Department of Health, said the country has “achieved so much” in its efforts to limit the spread of the virus, “making it possible to take steps to reopen society and the economy”.

“Today I am asking everyone to stay the course on the public health measures needed to suppress Covid-19, such as covering coughs, hand washing, use of face coverings and 2m social distancing, which are essential for continuing the momentum towards the reopening of our schools and the resumption of our healthcare services,” he added.

The figures for new confirmed cases are being watched closely ahead of the anticipated publication of a travel green list .

However Tánaiste Leo Varadkar on Tuesday intervened in the debate on a “green list” of countries which will not require a 14-day quarantine, due to be published by the Government later this week.

Ahead of a Cabinet meeting to discuss the issue tonight, Mr Varadkar issued a statement to RTÉ which criticised “mixed messages” on international travel - something the Government has been accused of in recent days.

“The Tánaiste believes strongly that it’s wrong to send out mixed messages about international travel,” the statement issued by Mr Varadkar’s spokesman said.

“The Tánaiste believes there should be a green list as was previously agreed by the Government but if the travel advice for countries on the green List isn’t different to advice for other countries, then we would be better off not having a green list.”

The Government is due to publish a limited list this week, naming a small group of countries with low levels of the virus from which travellers will not be required to quarantine for 14 days if they arrive in Ireland. However, Government advice remains that people should not undertake any international travel, unless it is essential.

Meanwhile the North’s Department of Health again reported no new coronavirus deaths in Northern Ireland leaving the fatality total at 556, and just two new confirmed cases taking the number of cases to 5,859.

This is the eighth consecutive day in which zero Covid-19 deaths were recorded in Northern Ireland. Over that period there were 71 confirmed new cases of the virus, an average of just fewer than nine per day. So far 130,161 people have been tested for Covid-19 in Northern Ireland.

On Monday Dr Glynn said coronavirus outbreaks are happening in construction, fast food and supermarket workplaces. A building site in Dublin had to close temporarily after staff tested positive for Covid-19. Over 20 cases were linked to it so far and many other workers have been tested, Dr Glynn added.