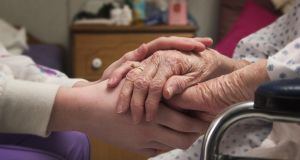 Hiqa, which has responsibility for oversight of nursing homes, restarted inspections on May 27th after temporarily suspending them on March 13th.

The State health watchdog was granted an emergency court order to shut down a nursing home over fears residents could not be protected during the coronavirus outbreak.

The Health Information and Quality Authority (Hiqa) has also revealed none of the 44 homes inspected by it where there had been confirmed cases of Covid-19 fully complied with regulations to stem the spread of the disease.

Hiqa, which has responsibility for oversight of nursing homes, restarted inspections on May 27th after temporarily suspending them on March 13th.

In a report on the impact of the pandemic on nursing homes, Hiqa said it began inspecting homes that had “significant outbreaks” and found shortcomings in management, staffing levels as well as infection prevention and control skills.

Chief Inspector Mary Dunnion was so concerned about “the management and

systems in place to keep residents safe” in one nursing home that she sought a court order for an emergency closure order. The order was granted by a district court on May 30th.

There were 16 residents in the home at the time Hiqa sought the court order.

Hiqa does not identify the nursing home in its report, but it says reports on all of the nursing homes visited during risk inspections over recent weeks will be published in due course.

Of the 44 homes inspected, 39 did not comply with one or more regulations drawn up by Hiqa to help the sector cope with the pandemic. Five were “mostly compliant”.

The watchdog said it is a “concern” that 11 nursing homes were found to be not compliant with at least one in three of the regulations.

Nearly six in 10 homes were found to be breaching governance and management regulations, which Hiqa said is a good indicator of how a nursing home is run.

The management failures in some homes may have “contributed to more severe outbreaks than may otherwise have been the case”, according to Ms Dunnion.

Some homes had not taken sufficient account of public health guidance, the report found.

The inspections revealed half of the homes visited had insufficient infection prevention and control measures in place, with some not following even standard routine practices.

“For example, one nursing home had left bedroom doors open for residents that had tested positive for Covid-19,” the report states.

“In another nursing home, staff were observed caring for residents in close proximity without using surgical masks in line with Health Service Executive guidance.”

Temperature checks on staff were not recorded in some nursing homes. 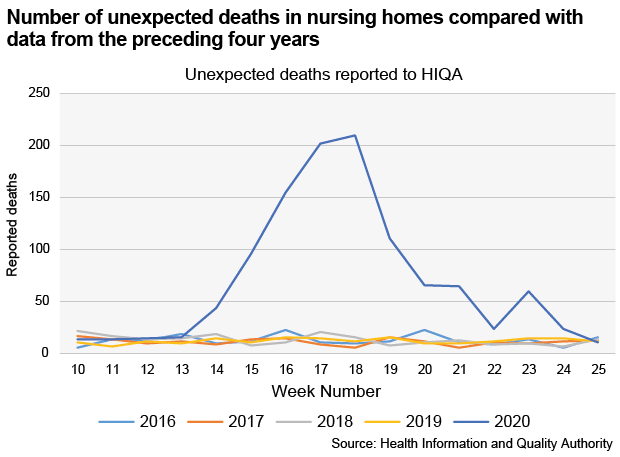 Staff shortages and poor layouts at some nursing homes hampered proper cleaning and hygiene. Almost a third (32 per cent) failed regulations on how a home should be laid out.

Staffing levels were a key area of concern identified by the watchdog.

More than one-fifth (21 per cent) of inspected homes had an “inadequate” number of staff, with many employees sick with the virus or quarantining as a result of exposure.

One home had 29 employees off work after testing positive for Covid-19.

For the report, inspectors also spoke with residents, their families and staff about their experiences during the lockdown.

It found that residents were “fearful, confused, angry, frustrated and lonely” with the additional isolation and constant fear of an outbreak only serving to “amplify these emotions”.

“They were afraid of what would happen should a resident or staff member test positive for Covid-19,” the report states.

“They were sometimes confused by the pace of change in the public health advice.

“One resident remarked that they were ‘not going to leave [their] room again until a vaccine was found’.”

There was anger and frustration among residents at being “largely confined to their own bedrooms” which created “a sense of abandonment and isolation that many found difficult to cope with”.

One relative of a resident contacted Hiqa to say: “My Dad is a broken man, he misses his family more than anything.”

The watchdog found “inconsistencies” across nursing homes over visits, with some being innovative and arranging outdoor or “window visits” while others were “completely closed to the surrounding community”.

“While this level of caution is somewhat understandable given the anxiety and confusion around Covid-19, this approach only served to heighten the worry for family and friends of residents,” the report found.

Staff were so stretched that there was little or no time to respond to queries about residents, with some nursing homes reporting calls to their homes soaring from around 300 a week to more than 3,000.

Some phone calls went unanswered, according to Hiqa, causing “immense anxiety and worry for concerned relatives and friends, particularly in the case of nursing homes that were known to have an outbreak”.

Hiqa said it became clear during inspections since May that the pandemic was having a “serious impact on the wellbeing of staff” at nursing homes.

One inspector was told: “We have some staff that are still out and it is likely they will never return, such is their upset.”

Staff were worried about contracting the virus and passing it to residents and their own families.

“The increased workload, coupled with shortages of staff in some nursing homes, meant that many staff who spoke with inspectors experienced feelings of guilt at not being able to spend time with residents and provide them with important human contact and reassurance,” the report found.

The number of senior staff and management who contracted the virus also hampered efforts to keep it under control.

with emotion when speaking about how they managed during the pandemic.”

“Some exhibited signs of extreme stress, fatigue, exhaustion and anxiety in trying to come to terms with what was happening around them,” said Hiqa. “Despite working long hours in extremely challenging circumstances, many staff questioned whether there was more they could or should have done to keep residents safe.”

Staff were also grieving the loss of residents.

In some cases, staff decided to live in the nursing home, away from their own families, to reduce the threat of passing on the virus. “One person in charge told us how they slept in the nursing home for six continuous nights due to staff shortages,” the Hiqa report stated.

reform of current models of care for older people in Ireland”.

“The continued use of multi-occupancy rooms and outmoded premises in some nursing homes undoubtedly created challenges in containing the spread of infection.”

Regulations governing nursing homes are also “outdated” and need to be urgently reformed, she added.