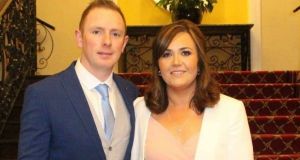 Robbie Walsh and his wife Tracey. Mr Walsh said his wife was told to get his affairs in order before he went in for surgery on his leg.

A man who almost died after contracting an extremely rare flesh eating bug is attempting to raise awareness of the condition.

Robbie Walsh (36) was diagnosed with Necrotizing Fasciitis in July of last year. He was told at worst he had a 25 per cent chance of survival with the best case scenario involving the loss of a limb.

In an interview with the Neil Prendeville show, on Cork’s Red FM, Mr Walsh said that fortunately doctors in the Mercy University Hospital in the city were able to save most of the impacted limb.

Last summer Robbie noticed that he had had a tiny cut on one of his toes. Initially he was unperturbed by it. However, he said his condition quickly worsened.

“It was a case of ‘I didn’t notice the cut at all’. Then the pain became unbearable. I went to South Doc. They thought it was gout. They gave me steroids and an injection for pain. It became progressively worse and I couldn’t breathe. I thought I was sick and the foot was something extra. I went to hospital. They took bloods and [the leg] had gone black. They had to cut it open to relieve pressure . . . They said it was Necrotizing Fasciitis (NF). I had never heard of it. ”

Robbie said it is commonly known as a flesh eating bug.

He said he was taken immediately for emergency surgery as the doctor said it was life-threatening.

“ ‘That leg is probably gone’, he told me. It was eating its way up my leg. It was a 25 per cent chance of pulling through. He was trying to save my life. They said ‘we are actually trying to save his life not his limb’. I was told there wasn’t time to say goodbye to my two children. By the time I was being brought to the lift my wife ran up. She was told to get my affairs in order.

Two days after Robbie woke up from surgery his breathing slowed, his kidneys were failing and his lungs were collapsing.

“I was on the way out, all this from a pinch or a cut,” he said. He said he somehow pulled through after 12 days in ICU. “Each day the marker they used to mark my leg to indicate where it would amputate from got lower and lower. I had to go to the theatre a further five more times making it seven operations at this point,” he said. He got a skin graft after six weeks and began recovery.

“I want to raise awareness about Necrotizing Fasciitis because it can happen to anyone. I’m one of the rare survivors to not only walk and tell his story but to live and tell it.”

NF is an infection that results in the death of parts of the body’s soft tissue. It is a severe disease of sudden onset that spreads rapidly. Symptoms usually include red or purple skin in the affected area, severe pain, fever, and vomiting.

It is a rare condition caused by several kinds of bacteria. Even with treatment, it’s estimated that up to two in every 5 cases are fatal.