I have mental health issues, but they don’t define me 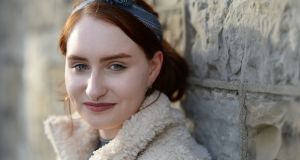 Bronagh Loughlin: ‘I am quite a positive person; I have goals, dreams and ambitions.’ Photograph: Dara Mac Dónaill / The Irish Times

I am incredibly open about my struggles with anxiety and, as a result of that, I do not shy away from talking about my worries to people in my life.

I remember one day I was in work and someone asked me about my anxiety and how it feels. A former boss was in the room. He knew that I had anxiety and mental health issues in general. After voicing them, my feelings of paranoia and concern about the world around me, he called me a negative person. Since that day I closed up and did not mention any more about my anxiety when he was around. For a long time, this was not just simply because I was shut down but because for a moment I felt as though I was the problem and I hadn’t felt this way in a long time. I am the kind of person who does not get offended easily but I strongly dislike being called negative. It is crystal clear why – no positive connotations are attached to it.

On the other hand, I have spent so much of my life fighting how I feel inside to be able to be positive and it upsets me when my anxiety worries are deemed part of my personality, like a trait or characteristic of me. I’m sure many with mental health issues feel the same way. The remainder of that day, I felt awful about myself and did not stop to take a step back to think that anxiety may translate as negative but that does not mean I translate this way. I am so tired of my mental health issues being deemed a component of my personality. Although my anxiety and depression have given me some wonderful characteristics such as overwhelming compassion for others going through these issues, a worried, stressed, and negative person is not all that I am.

I cannot help that I have irrational fears and that it seems that I am over worrying or being paranoid; it is what comes with anxiety. I am exhausted of mental health being viewed this way. This may be the first time it inspired me to write about it, however, this is not the first time it has happened.

Ironically, I am quite a positive person; I have goals, dreams and ambitions

During my years of bad depression in my early teenage years, I recall a friend of my mum’s coming over for the evening. I came down and was cracking jokes and laughing on the couch. She knew I was depressed and had attempted a suicide only a couple months back. She pulled me aside a while later and asked me: “I am confused as to why you are laughing and joking, are you not depressed?” The ironic thing here also is that she claimed that she had dealt with depression too.

This felt bizarre because it is often said that the people out in the world suffering with depression are usually the happiest people on the outside. Why was I any different? In addition, having depression is not a case of feeling depressed constantly, you can communicate and laugh with people, you can have a normal conversation with another human being. Its almost as though we all fit in this one box. I am depressed so I must be like that and show it every second of the day? Or I have anxiety so I must be a negative person who is constantly being over the top rather than simply having negative thoughts that consume me to the point of irrationality. I finally thought about all of this rationally and concluded that it is not me that is the problem – I suppose the problem is more so how mental health issues translate.

As someone with mental health issues, being stereotyped or thought of as nothing more than my issue itself is very upsetting. I have much more to offer than simply negative, irrational and paranoid thoughts. Ironically, I am quite a positive person; I have goals, dreams and ambitions. Not to mention, I go after those goals, dreams, and ambitions. I try to see the positive side in everything and try my best to rarely complain because I know that there is always someone in a worse off position than myself, be it with their own mental health struggles or something entirely alien to me. The stereotypes and thoughts that people with mental health issues are no more than their issues appear to derive from this belief that every person with a specific mental health issue is the same.

Also known as overgeneralisation, which plays a major role in the stigmatisation of a mental health issue or an individual with a mental health issue. Similarly to how with my anxiety I overgeneralise by relating one experience to all, such as that I am poor when it comes to public speaking, the same goes for people who do not experience mental health issues. After all, if we have not gone through something ourselves, we are reliant on other people’s experiences to better explain. For that reason, if you have a friend who has severe depression, although she may be more severe than other people who may be in a recovery stage, you may view anyone who is depressed to be this way. The problem is it is like saying all Labradors behave exactly the same or, in a worse scenario, that all Rottweilers are dangerous and violent.

In reality, everyone’s experience with mental health is entirely their own. Although I enjoy being open about my mental health struggles as a means to advocate that it is normal and okay to feel this way, it makes me very upset to think that someone could think I am no more than anxiety. In reality, I am so much more. Yes, I do experience negative thoughts because I have a mental health issue but that is a very small part of who I actually am. Although these thoughts are negative, the way that I decide to deal with them is not negative. I fight them to the point where they are not the reality.