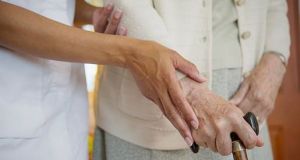 The HSE and Hiqa have clashed previously in legal proceedings over a difference of opinion around conditions in a care facility. Photograph: Getty Images

The HSE has taken a legal action against the State’s health service regulator over its insistence that the number of registered beds at a west Cork community hospital be reduced.

The regulator, the Health Information and Quality Authority (Hiqa), has repeatedly pushed the HSE to reduce the number of multi-occupancy rooms at Clonakilty Community Hospital in recent years.

The HSE has brought a court case against Hiqa in Bandon District Court over the regulator’s refusal to continue with the registration of about 120 beds at the facility, and its demand that they be reduced to about 100 because of concerns about safety and the number of multi-bedded rooms.

There are currently about 74 residents living in the community hospital, built in the 19th century.

Inspection reports published by Hiqa in recent years have highlighted difficult living conditions at the home, with residents sharing rooms and left with a lack of privacy and space.

The legal action began before the Covid-19 pandemic which badly affected the Clonakilty hospital, which lost 10 residents to the virus in an outbreak that began in early April.

The HSE told Hiqa in response that the patients in the unit had dementia, and it had not been possible to accommodate residents appropriately elsewhere while maintaining infection control.

Last week the HSE said it had followed “expert advice and guidance” at “all times” from public health and geriatrician consultants and the HSE’s own infection prevention and control team .

In Hiqa’s most recent report, published in January after an inspection in September 2019, the regulator found that the Clonakilty hospital had failed to implement previous Hiqa recommendations, and that it was in “major” non-compliance as a safe and suitable premises.

Even after the construction of 20 extra single en suite bedrooms and more communal space, the majority of residents would still live in rooms with four residents, said Hiqa.

Hiqa said in its inspection report that this would result in “difficulties in upholding the rights of residents and ensuring regulatory compliance”.

Expressing concerns about the current accommodation standards at the home, Hiqa said in its report: “The use of multi-occupancy rooms for up to seven residents did not support the receipt of personal care and communication in a manner that protected privacy and dignity.”

A number of residents told inspectors that the noise level in multi-occupancy rooms “could be disturbing and upsetting, especially if a fellow resident was disturbed and shouting”, Hiqa said.

The legal action is listed for mention in court in early September. The HSE and Hiqa both declined to comment.

This is not the first time that the health service and its regulator have clashed in legal proceedings over a difference of opinion around conditions in a care facility.

In 2017 the HSE appealed a decision by Hiqa to restrict admissions at Joseph’s Hospital in Ennis, Co Clare, to Ennis District Court over concerns about the quality of life for residents.

There have been delays in improving standards in care homes to single-occupancy rooms.

Congregated settings for older people have been badly affected by coronavirus, accounting for more than half of the 1,748 Covid-19 deaths in the State.

The last minister for health, Simon Harris, signed a statutory instrument in 2016 delaying Hiqa’s direction that 80 per cent of a home’s rooms be single-occupancy rooms until 2021.

However, Jim Breslin, the then secretary general of the Department of Health, told the Oireachtas Covid-19 committee last month that it would be “difficult” even to meet this target given the impact of Covid.