Number of confirmed cases advanced to 19,262 on Sunday 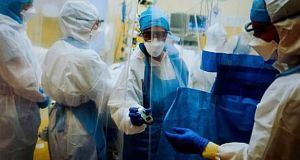 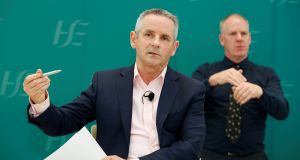 Health Service Executive chief Paul Reid during his briefing at University College Dublin where he said systems which had been established for three to six months would now be needed for a much longer period, perhaps into next year. Photograph: Leon Farrell/Photocall Ireland/PA Wire

The Department of Health has reported that another 26 people have died from Covid-19 and a further 701 new cases of the disease have been confirmed.

This brings the death toll of confirmed and probable coronavirus-related deaths to 1,087 in the Republic and the total number of known cases to 19,262.

Data validated by the Health Protection Surveillance Centre resulted in the “denotification” of two deaths where people originally thought to have been victims of Covid-19 were later found to have died from an unrelated issue.

These two deaths are reflected in the overall death toll figure of 1,087.

The National Public Health Emergency Team (NPHET) at the department - the group responsible for the State’s public health response to the pandemic - released further details of 18,431 Covid-19 cases up to Friday, April 24th.

The figures showed that a further five people with the coronavirus disease were admitted to intensive care units (ICU) in the prior 24-hour period, bringing to 349 cases the number in ICU as a result of the disease.

The gender breakdown was 57 per cent female and 42 per cent made.

Healthcare workers continue to be among the largest group of people affected. Some 5,064 infected people in Friday’s analysed sample were healthcare workers, an increase of 217 in a day.

A further 40 people were hospitalised as a result of the disease, bringing to 2,576 the number of people with Covid-19 in the country’s hospitals, keeping the proportion of hospitalisations at 14 per cent of all cases.

There was a surge again in the percentage of cases transmitted in the community to 63 per cent of the cases for whom transmission status was known. That percentage was 48 per cent in the previous day’s figures.

Close contacts accounted for 33 per cent of transmissions, down from 48 per cent a day earlier, on Thursday.

Dublin remains the epicentre of the coronavirus outbreak with 9,224 cases out of the analysed 18,431, or 50 per cent of all cases - a rise of 214 cases over the 24-hour period examined in detail by the HPSC.

Earlier the HSE chief executive Paul Reid said it will be able to scale up to carry out 100,000 Covid-19 tests per week by the third week of May despite initial concerns.

A road map had been agreed with the HSE and senior Department of Health officials, including the secretary general, for how testing capacity could be built up in the coming weeks, and a joint paper would be put to Cabinet on the plan next week.

On Saturday The Irish Times reportedthat the HSE had expressed concern over a recent announcement by NPHET that testing is to be significantly expanded to cover 100,000 suspected cases a week. This follows an expansion of testing to all residents and staff in nursing homes with outbreaks of the virus.

Within the HSE there was understood to have been worries about capacity and concern at the process that led to the announcement of the move, as well as what was seen as a lack of consultation.

Commenting on Sunday at a briefing in UCD, Mr Reid said he would have been naïve to think there would not be tensions between the HSE and the department in his role but they were “constructive tensions.”

Mr Reid said the HSE had been operating on a “war zone” footing since the start of the crisis but a more sustainable model would be needed into the future, as it was clear the country would be dealing with the coronavirus “well into 2020, most likely into 2021,” he said.

The HSE was planning to place an order for another significant shipment of personal protection equipment (PPE) from China, worth between €150-200 million, Mr Reid said.

However, the long term plan would be to develop a “reliable and sustainable” supply of crucial PPE such as surgical masks and gowns from Irish businesses.

“There have many good examples of SMEs who have put on the green jersey and redesigned their business models to supply us with much needed protection,” Mr Reid said.

There are currently 27 laboratories carrying out coronavirus tests, including the national lab in UCD, several acute hospitals, a Department of Agriculture facility, Enfer, and contracted labs in Germany. Currently the system had a capacity to process a peak of 10,000 tests a day, Mr Reid said.

Some 29 of the 47 community swabbing centres for Covid-19 tests were open this week, and others could be opened as needed to meet the testing demand, officials said.

Admissions of Covid-19 patients into acute hospitals and intensive care units has remained stable in recent weeks, despite fears the system could be overrun as confirmed cases increased as seen in countries like Italy.

There are 749 coronavirus patients in hospital, and 123 of those are in intensive care, Anne O’Connor, HSE chief operations officer told the briefing.

There are also 150 non-coronavirus patients in intensive care, leaving 139 ICU beds available, with space to open more in the event of a surge in severe cases.

Only 150 private consultants have signed up to work as public consultants during the crisis to date, the briefing heard.

The HSE’s self isolation facility has had 190 people admitted and 102 discharged, and has not “reached the maximum capacity,” Ms O’Connor said.

There were some 4,500 HSE staff out sick currently, either in self-isolation with the coronavirus, with suspected Covid-19 symptoms, or for other reasons, Ms O’Connor said.

The HSE is hoping to launch a pilot of a contact tracing mobile phone app next month, but discussions were still ongoing with the Data Protection Commissioner over the details of the app, Mr Reid said.