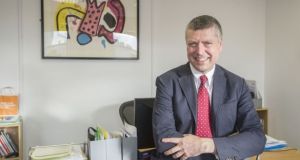 The new chairman of the Health Service Executive has warned of the dangers of poorly directed spending on healthcare “bankrupting” the country.

Ciarán Devane, who was appointed to the role by the Government last September, said he feared countries like Ireland could be bankrupted “if you throw lots of money at healthcare and it doesn’t deliver”.

He cited the example of the massive increase in the population of older people with complex health needs, which meant the health service was “in a completely different place”.

“In the 1980s, the priority was getting it right and fixing people and controlling infectious diseases but now it’s about older people with multiple morbidities and they shouldn’t be in hospital for a year,” he told the 2019 Health Summit.

Spending on hospitals currently consumes three-quarters of the health budget, he said, but this ratio has to shift towards spending in the community and on integrated care.

Mr Devane declined to comment on the spending overrun at the national children’s hospital, saying “I don’t know much about it at all”.

Even at a price of €1.7 billion, the hospital would not be the most expensive of its kind in the world, he suggested. The key to getting it right was to make sure the right services were delivered in the right place at the right time, he said.