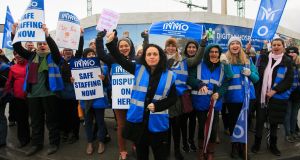 Dr Michael McGloin, who heads up the Primary Care Centre in Athenry, 25km (15.5 miles) east of Galway city, says the nurses’ strike action is just another symptom of a crumbling health service.

Services were suspended on Tuesday and Wednesday. Dr McGloin said he does not know what will happen when the service is cancelled for three days next week.

“Our public health nurses work here seven days a week. They hold clinics every day, tending to post-surgery patients, carrying out pregnancy and baby developmental assessments, and so on. The service is stretched to the limit already.”

He said there will be a strike for three days and patients are being told to go to their GP if there is something urgent.

“At the moment, we don’t know what the impact of the strike action will be on hospital out-patient lists locally, but what we do know is that there are already hundreds and hundreds of people waiting.

“I had a woman come in to see me yesterday. She had pneumonia and I wanted to send her to hospital immediately but she absolutely refused to go. She said she would take her chances at home rather than face into A&E, where she knew she would be left lying on a trolley and subjected to Dickensian-style treatment due to nursing shortages.”

“The whole thing is crumbling and nothing’s being done to stop it,” Dr McGloin said.

“Take, for example, the Autistic Spectrum Disorder Clinic, which is based here at the Athenry Care Centre. It offers support to children with autism from counties Galway and Roscommon who don’t have an intellectual disability. At present, children have to wait two-and-a-half years to be assessed and then another two-and-a-half years to be seen to avail of the support. And once they turn 18, they’re discharged with no service after that.”

Dr McGloin says he has become embarrassed by the health service. “We have Canadian medical students here regularly and five years ago I would have boasted about how comprehensive and how good our health service was, and now, it’s an embarrassment. There is just no certainty about anything anymore.”

He contends the primary-care model is the only thing that works at present. “We are picking up all the pieces but we just do not have the capacity for any more,” Dr McGloin said. “I am close to retirement and I’m working harder now than I ever did.”