Cardiac and cancer surgeries cancelled due to nurses’ strike 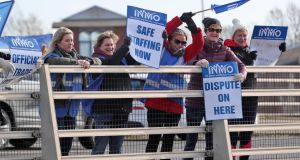 Serious cardiac, cancer and neuro surgeries are among the thousands of operations cancelled as a result of the three days of industrial action by nurses this month.

The risk of patients deteriorating and even dying is likely to increase significantly next week, when over 35,000 nurses plan to strike for three consecutive days.

The Irish Nurses and Midwives Organisation (INMO) has made it clear that only “life-preserving services” will be provided during periods of industrial action. While this has led to the cancellation of thousands of elective operations, more urgent and serious procedures have also been affected.

These have included cancer operations, neurological procedures and heart bypasses. In some cases, procedures have been postponed more than once because they were scheduled for nurses’ strike days.

In one case, a patient scheduled for a bypass in a Dublin hospital on Tuesday last week had his procedure cancelled, even though the strike was on the Wednesday. Doctors had safety concerns as he would have been in intensive care on the Wednesday. His operation was rescheduled to this week but cancelled again due to industrial action and looks likely to be further delayed next week.

In some cases, a delay of a few days would not impact on a patient’s health. However, with multiple cancellations, and ever-growing waiting lists, many affected patients may have to wait weeks and even months for urgently-needed surgeries. Not surprisingly, doctors are increasingly worried about the risks to patient safety.

Asked about the impact of the strike on his Dublin hospital, one consultant said only cancer operations were being allowed proceed “and they’re even being selective with that”. His outpatient appointments had also been cancelled

The impact of the strikes has been greatest in the large hospitals, especially in Dublin, where the contingency arrangement between the INMO and the Health Service Executive have been most strictly enforced. There, nursing staffing levels in emergency departments have generally been kept to the minimum prescribed in the contingency arrangements. Provisions allowing for extra staff to be called in from the picket line during emergencies or surges in patient numbers have been used on only a handful of occasions.

Outside Dublin, a more flexible interpretation of these arrangements has applied in many smaller hospitals, where staff are more likely to be on first-name terms with medical colleagues than in larger urban facilities.

“This dispute will be won or lost in the big city hospitals,” said one manager in a hospital outside Dublin. “We’re just keeping our head down and getting on as best we can. Generally, if I need something done, and it’s an emergency, it gets done.”