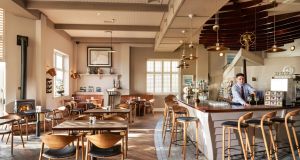 It has been a bewildering few months for hoteliers. Speak to anyone in the industry and there is an unmistakable sense of before and after. Until they voluntarily closed their doors in mid-March, the first months of the year had been promising.

All have been responding to the sudden cessation of business, the subsequent period of deep uncertainty and the dawning challenges of hosting guests in the midst of a pandemic summer. Even this week, information on regulations remains fluid.

The latest advice, relevant to pubs within hotels, specifies seating time limited to 105 minutes, with 15 minutes between bookings to allow for cleaning and no overlap of customers.

Paul Diver, the owner of the Sandhouse Hotel in Co Donegal, foresees difficulties before some establishments even open their doors. The Sandhouse is a four star seaside hotel overlooking Rossnowlagh beach. But part of the business includes the casual, post-beach music venue, the Surfers bar.

He feels that the pub regulations – the reservations-only policy and the stipulation that a “substantial meal” of at least €9 is served to customers – compromise the point of reopening.

“It is the Government pandering to Dublin pubs,” he says. “We would say that there isn’t the need for any of those rules for rural Ireland because we haven’t got the footfall. I would think that a lot of colleagues won’t bother opening until the next phase because it is going to cause so much hassle with your customer – saying they have to spend so much money, that they have to leave at a certain time . . . It is dictating to the customer rather than the customer dictating to you.”

Along the west coast hotels are continuing to plan around a sense of fluid guidelines as they try to salvage something of the summer.

Anne-Marie Kelly took up her role as general manager of Renvyle House, a cosy and unorthodox historic hotel in Connemara just last November. She won’t forget the shock of the sudden transformation from bustling to echoing.

“We made the decision to close. It is unbelievable. It takes a while to sink in. A week before, we had been flying.”

It was the same elsewhere along the Wild Atlantic Way. Up in Co Sligo, Fiona McEniff is the general manager of the Yeats Country Hotel and Spa, flush on the coast at Rosses Point.

“I cried my eyes out when I had to tell the staff. It was heartbreaking. We had thought that we might struggle on, even with a smaller staff. But the bars were shut and for a while people could have a drink in the restaurant. Then that stopped. And guests checked out and the cancellations came.

“It was a terrible pressure and guilt as well to have to close. We knew it wasn’t our fault but it was still horrible.”

In the Armada Hotel at Spanish Point, Co Clare, John Burke spent the first few weeks frantically trying to steer the business through the mounting restrictions. The first signs were that weddings could be hosted on a limited scale. Then it became clear: no weddings. After that, they began to consider takeaway meals. They set up Blend Box, a cocktail delivery service and began to grow vegetables, which meant five jobs sustained.

“It was like an avalanche of setbacks for about three weeks,” he says.

“That first shock was the hardest thing I have gone through outside of a close bereavement in my life. It was far harder than any recession. I took a week and a half off and the mindset now is that we are on the attack again and moving forward. We had been preparing for ‘Armada 2021’.

“We had spent five years building up to a €1.8 million investment which would transform the hotel again. I had to mourn that for a little bit and now all of that energy is going into this challenge.”

“March 16th,” says Des O’Dowd, the owner of Inchydoney Island Lodge and Spa in Cork. “The date is seared onto my brain.”

O’Dowd bought his partner out of Inchydoney in 2008. He feels the recession caused a continuing economic deterioration in rural Ireland until around 2014. That’s when he began to notice things turning around. He has invested about €2.5 million in refurbishing the hotel over the past few years. “So thank God the property is in good shape. In terms of personal finances, well . . . we were just getting back on our feet again, realistically.”

It has been terrible to walk through the hotel

Kelly decided to stay in Renvyle House for the duration of the lockdown. A skeleton staff also remained on.

They kept busy replanting the herb garden, painting every available surface and beginning to rethink how the place would operate when it could receive guests again. She put a simple notice on social media in mid-April. It was just an alert that Renvyle would be open again in July. “And the phone started ringing. And ringing. The positivity around that message was something special.”

Physical distancing and the elimination of touch points have been central to the planning. Rooms will be left free for 48 hours between guests. The kitchen layout is fortuitously large with a traditional layout that includes a larder and a separate pastry section and another area for the breakfast chef.

There will be one-way system in the diningroom so guests can move at their ease. A food menu will operate in the bar from noon until 9pm and food and drinks will be delivered by tray service.

“The style of service here is traditional so it is drinks to the table. We are basically ready . . . I myself will be managing the one-way system in the diningroom from the front of house. In a welcoming way. I’m not going to be clad in a jump suit,” she laughs.

But that image gets to the heart of the dilemma facing all hoteliers. The point of staying in a hotel revolves around luxury and escape. But as the country takes tentative steps towards reclaiming a sense of a normal, social lifestyle, how can any guest feel relaxed around other people after three months of consciously and diligently avoiding anything like close proximity?

“People will have to book breakfast rather than wander down when they want. All the little things that guests took for granted take planning,” says McEniff.

“Going for a swim will probably involve booking. But on the other side we have the golf course and so many outdoor activities that guests like to use.”

“One of the big challenges will be bedrooms,” says Diver in Rossnowlagh. “Taking the linen and towels out safely and cleaning them. That is one of the areas that will require the most retraining.”

Burke estimates they will have spent about €50,000 to make the kitchens in the Armada more open plan. The hotel ran three daily menus before the lockdown: whether it is practical to continue with that remains to be seen. “It is ever evolving with protocols,” he says.

But this has been a bright week after a dark season. The Armada will open its doors on June 29th, as will Inchydoney Island. The Sandhouse is open to guests from July 1st and Renvyle House from July 10th.

The Yeats Country hotel will reopen on June 29th. It’s one of the hotels in the Brian McEniff Hotels group which has a tradition for catering to families. Thinking her way through the minefield of retaining the old services while observing the new restrictions has been central to McEniff’s planning.

“We are waiting on guidelines for several aspects. We used to have a creche for babies but I am sure that won’t be viable for the time being. From seven-year-olds up we can still entertain children under social guidelines. It is a service we have always given to guests and we want to retain that.”

Profitability is not really in anyone’s thinking for the time being. Surviving and seeing life in the hotels is enough.

“It has been terrible to walk through the hotel,” says McEniff.

“Because it’s our home and it is family-run. So to walk through it closed really pulls on your heart. You feel a sense of protection towards your staff. Even the number of people locally saying the village looks dead without the lights of the hotel. Everything felt closed up for the past few months. So the excitement at the thought of being open again and having guests here is brilliant for us. It will get us through this.”