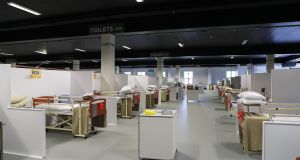 The Citywest centre can accommodate up to 1,700 patients. It was leased by the HSE as an Covid-19 overspill facility in the event of a surge in hospital admissions. Photograph: Nick Bradshaw

The Health Services Executive will decide in the next 10 days if it is to extend the lease on the Citywest Hotel and Conference Centre which has been used as an isolation centre during the Covid-19 pandemic at a cost to date of €21 million to the exchequer.

The hotel and conference centre, which can accommodate up to 1,700 patients, was leased by the HSE as an overspill facility for the health services in the event of a surge in hospital admissions.

While the cost of leasing the facility has led to public controversy, HSE figures have indicated that if the number of coronavirus cases continues to increase, putting more pressure on hospitals, extra capacity might be required for isolation facilities and step-down beds.

The lease with hotel owners Tetrarch Capital, signed at the end of March, is due to expire on October 22nd. There is a clause in the contract that allows the HSE to extend the lease until the end of the year.

“The HSE licence agreement, in respect of both the Citywest Hotel and the Conference Centre runs to October 22nd, 2020,” said a HSE spokeswoman. “In the meantime, the requirement for the ongoing provision of self-isolation facilities beyond October is being examined with a decision soon to be finalised.”

The coronavirus outbreak did not reach the level envisaged under worst-case scenario modelling. Therefore, the centre has been underutilised since it began operations as a medical and step-down facility.

Some 600 people were transferred there during the height of the pandemic as a step-down or isolation centre. The site includes a “field hospital” as well as the conference centre which is used for procedures.

The facility was used to help non-Irish-born workers in meat factories who had been in contact with the virus to self-isolate.

The cost of leasing the facility came under strong criticism from some public representatives.

Sinn Féin TD for Dublin South West Seán Crowe claimed the lack of use of the centre was typical of the HSE’s lack of joined-up thinking.

“I appreciate that contingencies and plans had to be put in place for surges and spikes in Covid cases. That is only prudent. However, the leasing of the Citywest complex at a cost of over €20 million is a flagrant waste of money,” he said.

During a recent hearing of the Oireachtas Special Committee on Covid-19 Response, the HSE’s chief operations officer, Anne O’Connor, said there were about 100 people self-isolating at the facility, and an additional 60 healthcare workers also using it as an isolation facility.

Said Ms O’Connor: “In the self-isolation facility, we provide two different types of accommodation, one of which is for people in general who need to self-isolate and are referred through public health, their GP or acute hospitals.

“The second cohort is healthcare workers who need self-isolation as they are returning to Ireland to work.”

She said the conference centre did not have residents but was being used as a drive-through glaucoma testing by the Mater hospital.