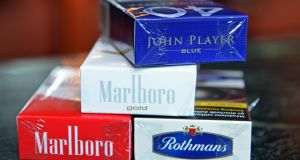 The price of a pack of 20 cigarettes has increased by 20 cent in the budget. File photograph: Eric Luke/ The Irish Times

Tax and excise duty accounts for almost 80 per cent of the price of a 20 pack of cigarettes, the Dáil has heard.

During a debate on the budget increase of 50c on a 20-pack of cigarettes to bring it to €14, Minister for Health Stephen Donnelly said that tax accounts for €10.97 of the price or 78.33 per cent of the total cost.

He said roll-your-own tobacco would increase by 70c to €19.40 as part of the budget provisions.

The Minister said Ireland is committed to a policy of high tax on tobacco, which he said was “very effective” in cutting consumption.

Labour TD Duncan Smith asked at what point the effect of increased taxation was lost by the smuggling of tobacco products.

People Before Profit TD Richard Boyd Barrett said “I don’t think people should be punished for an addiction they develop”. He added that the measure disproportionately affected lower income families.

His party opposed the tax hike but he did not put it to a vote and the measure was passed. The price increase takes effect from midnight.

Labour TD Brendan Howlin said there had to be “some sense of finality to using pricing as a weapon” to stop people smoking.

The Minister acknowledged that lower income families were most affected. He also said that as well as pricing the Government had increased the funding of the State’s wellbeing agency Healthy Ireland by €20 million.

Mr Donnelly said of the tobacco taxation policy that the exchequer lost out on an estimated 22 per cent of the 2.769 billion cigarettes consumed in Ireland every year – 13 per cent illicit consumption and 9 per cent imported.

It was the equivalent of 13 million packs and accounted for a notional €242 million in tax foregone.