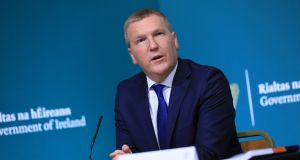 Minister for Public Expenditure and Reform Michael McGrath said the State would use the Stability Programme Update next April to ‘set out a more medium term fiscal framework and a pathway to a more sustainable budgetary position.’ Photograph: Julien Behal Photography/PA Wire

The State will next year outline its plans to tackle the “hugely significant increase” in the national debt caused by Covid-19, the Minister for Public Expenditure and Reform Michael McGrath has said.

Speaking at this evening’s budget press conference, Mr McGrath said that the state “cannot add €20 billion” a year in borrowing, and that across this year and next year, “you are looking at a combined deficit in the order of €40 billion and that is going to, in effect, be added to our national debt.”

“Whatever way you look at it, it is a hugely significant increase in our national debt,” he said. The State is currently able to borrow at extremely competitive rates, with supportive policies from the European Central Bank ensuring near-zero interest rates for sovereign borrowing.

However, Mr McGrath said that both he and Minister for Finance Paschal Donohoe had signalled “some realities” in their budget speeches this afternoon “that we cannot add €20 billion every year. That goes without saying, and that is why we are keen to see deficit reduction”.

He said the State would use the Stability Programme Update next April to “set out a more medium term fiscal framework and a pathway to a more sustainable budgetary position.”

As the State comes to refinance the debt pile accumulated during the Covid crisis, Mr McGrath said the levels of support from the ECB may not be in place. “That’s when you need to be sure that you have convinced the markets and investors that your public finances are on a sustainable path.”

We know where we need to get to, but for now there has been no choice as far as we are concerned, and no debate as to whether we need to step in and support the economy where different parts are under such serious strain, this is the right thing to do, but obviously you cannot provide that level of support indefinitely,” he said.

The Minister for Finance said that he wasn’t yet able to outline the scheme that would take over from the Employment Wage Subsidy Scheme when it expires at the end of March, after he earlier promised there would be no “cliff edge” to the scheme.

“It will continue beyond that but we are going to have to get into 2021 before we can give an indication to employers regarding what the continuation will look like.”

He also defended changes to motor tax which will penalise owners of older cars, arguing that the measures were necessary even though they mean motoring costs will rise.

“I do appreciate that for many it is an additional bill at a tough time, but the way we were taxing vehicles and motor use here in Ireland did not reflect the impact it was having on our environment.”