Ibuprofen during pregnancy may harm fertility of daughters, study finds

Prolonged exposure to painkiller may have long-term effects on female foetus, researchers warn 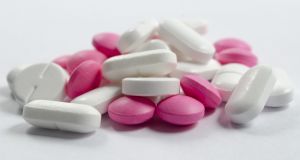 French researchers have warned of the danger of pregnant women taking ibuprofen in the first six months of pregnancy. Photograph: Getty

Pregnant women who take ibuprofen in the first six months of their pregnancy may be damaging their daughters’ future fertility, new research indicates.

Taking even small amounts of the common painkiller may reduce the store of eggs in the ovaries of their daughters, according to a study.

French researchers have found evidence in human ovarian tissue that exposure to ibuprofen during the first three months of foetal development results in a “dramatic loss” of the germ cells that go into making the follicles from which female eggs develop. The germ cells either died or failed to grow and multiply at the usual rate.

The authors of the study, which is published in the medical journal Human Reproduction today, say their findings raise concerns about the long-term effects of ibuprofen on the future fertility of women exposed to the painkiller when in their mothers’ wombs.

Doctors already advise pregnant women against taking ibuprofen in the first and third trimester after previous research pointed to an increased risk of miscarriage.

Dr Séverine Mazaud-Guittot, a researcher at the French National Institute of Health and Medical Research (Inserm) in Rennes, who led the latest study, said a poorly stocked initial reserve of follicles in baby girls “will result in a shortened reproductive life span, early menopause, or infertility” in later life.

“The development of the follicles in the foetus has not been completed by the end of the first trimester, so if the ibuprofen treatment is short we can expect the ovarian reserve to recover to some extent,” Dr Mazaud-Guittot said.

“However, we found that two to seven days of exposure to ibuprofen dramatically reduced the germ cell stockpile in human foetal ovaries during the first trimester of pregnancy and the ovaries did not recover fully from this damage.

“This suggests that prolonged exposure to ibuprofen during foetal life may lead to long-term effects on women’s fertility and raises concern about ibuprofen consumption by women during the first 24 weeks of pregnancy.”

About 30 per cent of women are estimated to use ibuprofen in the first three months of pregnancy, according to the study.

The researchers obtained human foetuses between seven and 12 weeks of development from legally induced terminations of pregnancy and with the mothers’ consent. Then they cultured the ovarian tissue in the laboratory; part of the tissue from each foetus was exposed to ibuprofen and a second part (the control) was not. Samples from 185 foetuses were analysed.

The researchers measured the quantity of ibuprofen in the blood in the umbilical cord in order to analyse how much the foetus would have been exposed to.

“We found there were fewer cells growing and dividing, more cells dying and a dramatic loss of germ cell numbers, regardless of the gestational age of the foetus,” Dr Mazaud-Guittot said.

“There were significant effects after seven days of exposure . . . and we saw cell death as early as after two days of treatment. Five days after withdrawing ibuprofen, these harmful effects of ibuprofen were not fully reversed.”

Prof Richard Anderson, head of obstetrics and gynaecology at the centre for reproductive health at the University of Edinburgh, said there are concerns that common painkillers such as paracetamol and ibuprofen might have effects on the developing baby when taken during pregnancy.

“These seem concerning results, though how much these experiments in the lab match what might happen when ibuprofen is taken by a pregnant woman are unclear. They do however emphasise the need to only take approved medicines during pregnancy, and for as short as time as necessary.”