Link between alcohol and cancer emphasised by Government 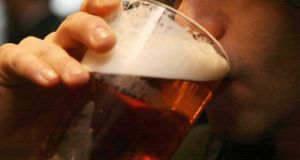 Minister for Health Simon Harris has stressed the link between cancer and alcohol consumption as he prepares to bring the Public Health (Alcohol) Bill back before the Oireachtas this week.

In an announcement timed to coincide with World Cancer Day this weekend, the Minister said the provisions of the Bill including the introduction of health warnings on drinks labels specifically mentioning the link with cancer will help bolster efforts to fight the disease.

“Reducing alcohol intake is an important step in reducing the burden of cancer. During the coming week I will bring the Public Health (Alcohol) Bill into the Dáil,” he said, before continuing:

“This is a landmark piece of public health legislation which will make a real difference when it comes to reducing the harm caused by alcohol, and I would appeal to all parties to support it.”

First introduced in 2015 by Leo Varadkar during his tenure as Minister for Health, the Public Health (Alcohol) Bill has been the subject of discussion, consultation and some controversy among politicians, health and industry figures over the intervening period.

Recent concessions made to small retailers mean that alcohol products will not have to be completely segregated from other items within a store, but other measures to reduce visibility such as barricades and separate storage units will have to be observed instead.

The Bill still contains a commitment to introduce minimum unit pricing despite opposition from some quarters, a move which has been welcomed by public health experts and advocacy groups.

Speaking about World Cancer Day on Sunday, Mr Harris referred to recent progress which has seen five-year survival rates increase from 44 per cent during the 1990s to 61 per cent between 2010 and 2014.

“The day has a particular focus on prevention and survivorship, which is reflected in our own National Cancer Strategy published last year. We can all take small steps to reduce our risk of developing cancer.

“Eating more fruit and veg, keeping active, watching our alcohol intake, keeping a healthy weight, and of course, quitting smoking, are all, in fact, cancer prevention in action,” he said.