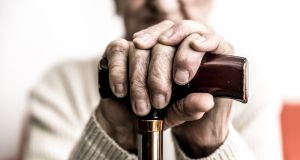 The changes that lead to Alzheimer’s are thought to take root up to 20 years before symptoms appear. Photograph: istock

Scientists isolated protein fragments from blood samples that allowed them to predict brain changes associated with the Alzheimer’s.

If further studies confirm the test’s effectiveness it could be used to spot early signs of Alzheimer’s in apparently healthy individuals.

Experts agree that new treatments designed to halt or reverse the disease are only likely to work if given early enough.

The changes that lead to Alzheimer’s are thought to take root up to 20 years before symptoms appear.

Alzheimer’s is strongly linked to the build-up of clumps of toxic beta-amyloid peptide, a protein building block, in the brain.

Currently levels of the peptide can only be measured in living patients using costly brain scans or highly invasive tests of cerebrospinal fluid.

A Japanese team led by Dr Katsuhiko Yanagisawa, from the National Centre for Geriatrics and Gerontology in Obu, showed that relative levels of the biomarkers reflected the state of beta-amyloid deposition in the brain.

The test was assessed using samples from 373 Japanese and Australian participants including mentally normal individuals as well as people with mild cognitive impairment and Alzheimer’s.

“These results demonstrate the potential clinical utility of plasma biomarkers in predicting brain amyloid-beta burden at an individual level.”

Commenting on the results, British experts said the research was promising but more work needed to be done.

Dr Carol Routledge, from the charity Alzheimer’s Research UK, said: “A blood marker for Alzheimer’s could prove valuable as a minimally invasive and cost-effective addition to the current diagnostic tests available for the disease.

“The ability to detect the very earliest stages of Alzheimer’s would not only allow people to receive existing treatments sooner but would also enable new drugs to be trialled in the right people, at the right time.”–PA

Concern over rise in Covid-19 cases in Louth, Donegal and Waterford

Life in Level 3: What is happening under the new restrictions in Dublin?