Broadcaster Gareth O’Callaghan to sign off radio show over illness 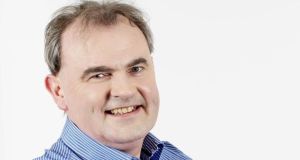 Gareth O’Callaghan has been diagnosed with the neurodegenerative illness Multiple System Atrophy.

Author and broadcaster Gareth O’Callaghan is to leave his role in Classic Hits FM after a diagnosis of Multiple System Atrophy (MSA), a neurodegenerative illness.

In a post on his Facebook page this Saturday Mr O’Callaghan said he plans to remain “strong and positive” despite having to leave the show. The broadcaster said he was devastated at being diagnosed with the incurable illness.

“It is a rare disease, very progressive and sadly incurable. I thought I might have been able to continue working as normal for another few months, but unfortunately the pace and the painful decline of this awful thing has really taken us by surprise.”

Mr O’Callaghan said he was learning to take life a day at a time.

Unfortunately it's true. I woke this morning hoping it was all just a bad dream. As you may have read I have been diagnosed with MSA, a rare, progressive and incurable disease. But I remain positive and hopeful. Time to appreciate the things in life I could never find time for

“I’ve always said that life is only a short journey, and . . . you suddenly find you are unexpectedly challenged by something . . . I now find myself facing those challenges. ”

The broadcaster said his voice is slowly deteriorating, but that he intended to fight the disease for as long as is possible. He also vowed to keep on writing.

Earlier this year he thanked listeners following their support after he announced that he had Parkinson’s disease.

Speaking on the Neil Prendeville show, on Cork’s Red FM in March, Mr O’Callaghan acknowledged he had been feeling unwell over the last few years. However, he attributed certain symptoms of the condition to stress.

“I was tripping. I was dropping things in work . . . I have . . . to stop and choose words . . . There were times over the last few years where I thought I was going mad. I couldn’t figure out what it was.”

After the Parkinson’s diagnosis in March he was subsequently diagnosed with MSA, a progressive neurodegenerative disorder characterised by a combination of symptoms. These affect the autonomic nervous system (the part that controls involuntary action such as blood pressure or digestion) and movement.

The symptoms reflect the progressive loss of function and death of different types of nerve cells in the brain and spinal cord. MSA is a rare disease with some 3,300 people in the UK and Ireland enduring it.