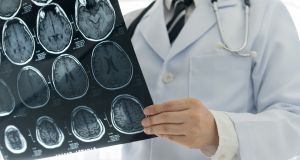 Improvements made in mortality from stroke in Irish women has levelled off in recent years, according to an EU study.

The study, published in the European Heart Journal, found between 1980 and 2016, deaths from stroke and other conditions that affect the blood supply to the brain declined overall in Europe, but in some countries the decline is levelling off or death rates are increasing.

Cerebrovascular disease includes strokes, mini-strokes, and narrowing, blockage or rupturing of the blood vessels supplying blood to the brain. It is the second single largest cause of death in Europe after heart disease, accounting for 9 per cent of deaths in men and 12 per cent of deaths in women each year.

Published on Wednesday, the study analysed data from the World Health Organisation (WHO) to examine mortality trends in three particular types of cerebrovascular disease in Europe for 37 years between 1980 and 2016.

These were ischaemic stroke (a lack of blood flow to the brain), haemorrhagic stroke (bleeding in the brain) and sub-arachnoid haemorrhage (SAH), in which bleeding occurs between the brain and the surrounding membrane.

The researchers, led by Dr Nick Townsend, associate professor in public health epidemiology at the University of Bath (UK), found that across the whole of the WHO European region for the most recent period for which data were available, there had been significant decreases in death rates from all three types of cerebrovascular disease in 33 countries for men and women.

There had been increases in three countries, for men in Azerbaijan, Georgia and Tajikistan, and in two countries for women – Azerbaijan and Uzbekistan.

According to the researchers, there was evidence of a recent plateau in trends where the rate of reductions in mortality in the most recent period was less pronounced than in the previous period. The countries involved were Austria, Denmark, France, Germany, Greece, Czech Republic and Hungary for men, and Ireland, Austria, Belgium, France, Germany and Switzerland for women.

There were also some countries in which death rates showed no change over the most recent period.

This means that in both sexes, more than one-third of countries showed either a slowing of the decrease in death rates, no decrease, or an increase in the most recent trend.

“Over the last 35 years there have been large overall declines in deaths from cerebrovascular disease in the majority of European countries,” Dr Townsend said.

“While these declines have continued in more than half of the countries, these have not been consistent across Europe and our analysis has revealed evidence of recent plateauing and even increases in stroke deaths in certain countries.”

Dr Townsend said the findings highlighted a need to counter inequalities by understanding local contexts in disease occurrence and treatment.

According to the European Stroke Organisation, every year, up to 1.3 million people in Europe suffer a first stroke.

The HSE’s National Stroke Audit for 2016 said the care of people with stroke in Ireland had improved since the national clinical programme for stroke was established in 2009-2010.

Stroke deaths here have reduced by more than 15 per cent. But, the report said, quality of care had not increased as much in other areas of stroke management.

“The incidence of stroke is rising 4-5 per cent per year but we still have a severe shortage of stroke unit beds to accommodate them or the specialist nursing, therapy and medical staff we need to care for them.”