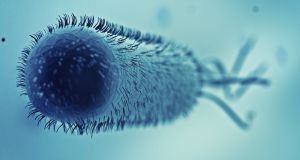 E.coli bug: up to August 14th there were 320 VTEC “notifications” in Ireland.

Health authorities have failed to find the source of the E. coli infection responsible for one of the worst food poisoning outbreaks ever experienced in Ireland.

An expert group, which is trying to trace how the outbreak arose, however, believes cases may have peaked in recent weeks.

E.coli O157, a bug that belongs to a group known as “verotoxigenic escherichia coli” (VTEC), has been responsible for 715 reported cases in Ireland since the beginning of the year – a majority of these are believed to have come from the one bacterial strain.

VTEC is a type of E.coli that can live in the gut of healthy cattle and sheep. Although most strains of E.coli are harmless, VTEC produces a powerful toxin and can cause severe illness, particularly in children under five and older people. The infection can be passed from person to person, through animal contact or through consuming contaminated food or water.

In late June, confirmed cases began to climb and up to August 14th there were 320 VTEC “notifications”. Some of those who got the bug required hospitalisation – 85 cases across Ireland were confirmed as being part of the outbreak after further genetic tests were completed.

Symptoms of VTEC including bloody diarrhoea, vomiting and stomach cramps but it can also cause a more serious complication called Haemolytic Uraemic Syndrome (HUS) in up to 10 per cent of cases, which can lead to kidney failure, and occasionally can be fatal. HUS is more common in children under five and in older people.

A multiagency team, led by the Health Service Executive’s Health Protection Surveillance Centre and the Food Safety Authority of Ireland (FSAI), is heading the investigation, and focusing on the “recent sharp increase in VTEC infection coinciding with the summer”.

“The majority of confirmed cases had dates of illness onset between June 22nd and July 7th,” a HSE spokeswoman said. VTEC case numbers in late July and early August were at levels typically seen at this time of year, “suggesting this outbreak can be considered to be greatly reduced or over”.

The outbreak control team are closely monitoring new cases of VTEC to determine if the outbreak has come to an end.

Ireland has a particular problem with VTEC as it has by far the highest rate of infection for this bug in the EU, according to adjunct professor at UCD Institute of Food and Health Alan Reilly, a former chief executive of the FSAI.

What is evident is that there is or was a common food source on the Irish market that was responsible for this outbreak that has yet to be identified, he added. “Warm weather has undoubtedly contributed by allowing bacteria to increase in numbers and the hosepipe ban is encouraging producers to irrigate crops with untreated water supplies,” he wrote in The Irish Times this week.

The Irish figures “are astronomical compared with those for the rest of Europe, but they explain the current outbreak of food-borne illness”. He cited the rapid expansion in the livestock population in Ireland, particularly in the dairy herd since the elimination of milk quotas. “More animals means more slurry to spread on land.”

A 2017 study by the HSE, Dublin Institute of Technology and the University of Limerick demonstrated the link between cattle density and contamination of private well water with cases of E.coli O157. “We are currently recycling pathogens in the environment which are ending up in our food and water supplies,” Prof Reilly said. This, he said, required the adoption of a “one health” concept that recognised the health of people is intrinsically connected to the health of animals and that of the environment.

How to avoid E. Coli

VTEC, also known as E. coli O157, is a common cause of food poisoning in adults and children with the potential to cause serious complications.

There are four simple steps to prevent food poisoning:

– always wash your hands before and after preparing, handling and eating food, after visiting the toilet or after playing with pets or animals.

– make sure that food is cooked all the way through in order to destroy any harmful bacteria that might be present.

– keep food cool in order to prevent bad bacteria from growing; make sure that your fridge is at the correct temperature to keep cold foods chilled - aim to keep your fridge at 5 degrees or below.

– to prevent cross-contamination; separate raw and cooked foods during storage and cooking and never let raw food – eg raw meat – come into contact with ready-to-eat foods such as salads.

VTEC can become mixed with meat when it is minced. Eating meat (especially minced beef) that has not been thoroughly cooked all the way through to kill these bacteria can cause food poisoning.

VTEC can also be found in the stools of an infected person and can be passed from person to person if hygiene or hand-washing habits are inadequate. This is particularly common among toddlers who are not toilet trained. Family members and playmates of these children are at high risk of becoming infected.

Any vegetables or fruit that have been contaminated by animal faeces and which are not washed properly before consumption can also cause infection.

Those who develop bloody diarrhoea are advised to visit their doctor.