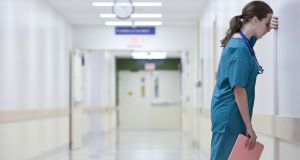 A Medical Council report has said despite assurances, interns in some specialities reported that they regularly worked in excess of the European Working Time Directive 48-hour week at the hospital. File photograph: Getty Images

Medical interns complained about feeling belittled and receiving preferential treatment because of their gender at Mercy University Hospital in Cork, according to an inspection report from the Medical Council.

Other interns and trainers at the hospital complained they were over-worked and had “too heavy a caseload” which the Medical Council said presents a patient safety concern along with concerns for the welfare of interns and their trainers.

The Medical Council published inspection reports from nine hospitals across the Saolta University health care group and the South/South West hospital group on Wednesday. The purpose of each inspection visit is to assess if and how each clinical training site complies with Medical Council standards.

Interns at Mercy University Hospital said while in general there is a respectful and professional working environment, there were a number of incidents when they were not treated with respect and described feeling belittled.

“Male interns reported that they received preferential treatment to that of their female colleagues from nursing staff while on call,” the inspection report said.

“Interns believed that reporting such incidents could have an adverse effect on them.”

Another intern complained that they were not able to eat while on a long shift and had been criticised by nursing staff for attempting to do so.

The Medical Council recommended that hospital managers and consultants should make clear to all employees the standard of conduct and communication expected at the site. “All staff should be made aware that bullying is unacceptable,” it said.

The report said despite assurances from the clinical training site to the contrary, interns in some specialities reported that they regularly worked in excess of the European Working Time Directive 48-hour week at the hospital.

The Medical Council said there were “significant concerns” at Galway University Hospital about the practice of clinical note taking. On occasion, some interns were asked to write clinical notes on a patient they themselves had not seen.

“This is not good or safe practice and is educationally unacceptable. The team recommended that this form of practice ceased with immediate effect,” it said.

The assessor team also said they were concerned with reports of interns taking consent from patients. At the same hospital, trainees said they were left unsupervised when a consultant was absent for a week.

The Medical Council said there appears to be tension between interns and nursing staff at Sligo University Hospital “to the extent that the interns felt that nurses did not regard them as doctors but as staff employed to carry out certain tasks”.

“The team recommended that leadership in the Nursing Directorate could address this issue,” it said.

Dr Rita Doyle, president of the Medical Council said: “We must ensure that our interns and NCHDs (non-consultant hospital doctors) are treated with equality and respect in a bullying-free environment. Bullying in the workplace will not be tolerated.

“Interns and NCHDs must have the resources required to allow them to treat their patients and to develop their skills while furthering their education.

“When doctors are overworked without appropriate rest periods and breaks this can lead to an impact on their physical and mental wellbeing and, in turn, could become a patient safety issue.”