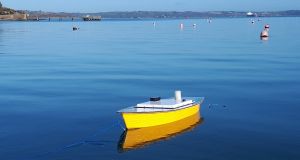 A sensor system that can for the first time detect E.coli bacteria in contaminated water and enable remote monitoring of supplies has been developed by Irish scientists.

The Hydrolight, developed by Cork-based scientific data management company Rinocloud, is accurate and quick, and its sensitivity means it can detect even tiny single cells that should not be present in clean water.

The buoy has a radio sensor to convey data from samples and uses artificial intelligence technology so large volumes of information can be processed in real time. The presence of E.coli in water, which can cause serious illness, can be detected with 99.3 per cent accuracy in just 3.37 seconds.

This contrasts with current standard test detection times of five to seven days, which can lead to delays in issuing boil-water notices. In some cases the threat of waterborne illness has passed because of such delays.

Rinocloud, which has developed the buoy with the help of the Environmental Protection Agency, Cork IT and Enterprise Ireland, was acquired by international biotech company Integumen in a €3.5 million takeover earlier this year.

The breakthrough is the culmination of three years’ work, its managing director Fin Murray explained, and because they are now owned by Integumen Plc, details will be announced to the London Stock Exchange on Wednesday.

The deployment of what are now patented as “wireless RAWTest Buoys” in water treatment plants would be a world first, he said, as it would reduce the average length of time water would be shut off in the event of contamination, reduce “boil-water” notices and restore supply and biological quality in more timely fashion.

Mr Murray said his own personal reason for developing the technology was having witnessed the injustice of contaminated water in so many African countries. “It’s kinda cool when you start out brainstorming ideas in a pub in Cambridge and it comes to a head. It’s brilliant,” he said.

The device is cheaper than many other tests and has the potential to detect other troublesome parasites found in water such as cryptosporidium and giardia. “And we have a project in place where we will be using the [AI] model to identify pathogens such as malaria in blood,” he said.

Remote detection of water contamination across the globe “is a first- and third-world problem, with future climate change threatening to increase flooding, contributing to water contamination and shortages”, said Integumen chief executive Gerard Brandon. This increases reliance on recycling and recovery of water supplies, which in turn requires remote monitoring before consumer consumption.

Rinocloud is working with Integumen – which has developed laboratory-grown human skin – on using the AI model it has developed in analysing skin to detect various microbes and DNA.

It is based in Ballincollig and employs 14 people, and it expects to double its workforce next year by taking on data scientists and microbiologists.