Coronavirus: Hairdresser group calls for salons to open next month 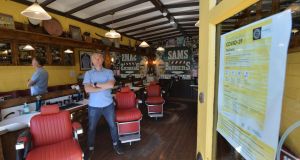 Sam Donnelly, co-director of Sam’s Barbers in the Blanchardstown shop, one of seven in the chain. Photograph: Alan Betson/The Irish Times

Hairdressers and barbers are calling for salons to be allowed to open next month, rather than in July as set out in the Government’s roadmap, over fears of a rise in “black market” hairdressers operating during the lockdown.

Hairdressers and beauticians are scheduled to reopen on July 20th in phase four of the Government’s plan to lift Covid-19 restrictions. This is due to the “higher risk associated with the spread of the infection” from person to person contact, the roadmap document states.

The Irish Hairdresser Federation has called for salons and barber shops to be allowed open on June 29th in phase three of the plan, if social distancing and extra hygiene measures are put in place.

David Campbell, president of the industry group, said hairdressers would wear masks and gloves, with disposable gowns for customers, and operate by appointment only.

“I think once people see it is Covid-protected and the measures that are put in place they will relax,” he said.

Mr Campbell, who also runs House of Colour in Dublin, said the hairdressing black market was a “huge concern” during the lockdown, with people advertising hairdressing services on social media.

“I do think people are naive if they think someone coming to their house to cut their hair isn’t a threat . . . They could be going to five homes a day,” he said.

“I’d be walking around the Phoenix Park and I’d see people with fresh haircuts. Our biggest fear is the black market is booming at the moment. People are getting their hair cut regularly, if you had us open it would be regulated,” he said.

Mr Donnelly employs 40 people and is a member of the Hair and Beauty Industry Confederation, and also called for hairdressers to open next month opposed to July.

To prevent the spread of Covid-19 his barber shops would require customers to use hand sanitizer upon entry, with haircuts strictly by appointment only.

“There would be no waiting allowed in the salon, if you’ve an appointment at 2pm you don’t arrive at five to 2pm as you won’t be allowed in to wait,” he said.

The number of hairdressing chairs would be reduced to allow for social distancing between staff, he said.

“All of the barbers would be wearing masks, 95 per cent of our job is behind the customer, unless you’re doing a fringe,” which meant staff could avoid standing in the “danger zone” in front of someone’s face, he said.

For beard trimming barbers would be wearing gloves, masks and an extra face shield, Mr Donnelly said. Hairdressers would wash their hands thoroughly after each haircut and wipe down their work area and chair, he said.

His shops would likely have to open for longer hours, and possibly on Sundays, to make up for limits on the numbers permitted inside due to social distancing, Mr Donnelly said.

“We’re still paying utility bills, our rent hasn’t [stopped], our insurance needs to be paid. When we go back our turnover is going to be significantly less”, due to social distancing, he said.

“There’s a pandemic and people are still getting haircuts. The longer they leave us shut the more people are going to get used to the black market,” he said.

Asked about the decision on when to reopen hairdressers here, Chief Medical Officer  Dr Tony Holohan said it was identified for a later stage “because that activity involves close touching of individuals”.

“It increases the risk of transmission infection, it is a more risky behavior,” he said.

“Remember those risks and the importance of protecting health and wellbeing of their employees who had worked in the provision of those services, and then second of all is the people who might seek out those services for very understandable reasons is that by doing so, it’s introducing a potential risk at an earlier stage than we think is safe to do so”

1 ‘Unseasonably’ windy weather set to buffet Ireland
2 Covid-19: Travel restrictions to stay and 'green list' put on hold amid fears of second wave
3 Taoiseach ‘disappointed’ he only learned of Barry Cowen’s driving ban on Friday
4 ‘Only a civil servant’ could have come up with ‘unenforceable’ pub regulations
5 Bobby Storey: The IRA's planner and enforcer who stayed in the shadows
Real news has value SUBSCRIBE