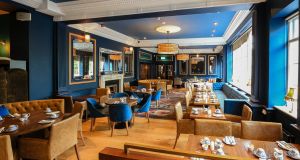 The owners of Gleesons in Booterstown in south Dublin estimate that it could accommodate perhaps 90 customers at one time under social-distancing rules.

One of Dublin’s leading publicans has said the Covid-19 wage subsidy scheme will need to be extended until the end of this year if publicans are to have a chance of surviving financially under social-distancing rules.

John Gleeson, the co-owner of Gleesons pub and restaurant in Booterstown, south Dublin, said it would be able to operate only to about a third of its pre-crisis level due to social-distancing protocols.

“On a busy day before the lockdown restrictions were introduced, Gleesons could accommodate up to 250 people seated and about another 100 standing,” Mr Gleeson told Inside Business, a podcast from The Irish Times.

“Under these arrangements, we’ve worked out that there’ll be nobody standing around, and with the social distancing 80 or 90 people max in the place. We have a big car park and hopefully we can bring some of the tables and the chairs that we’re not using in the pub out to the car park if there’s a nice summer.

“We’ll have to have extra waiting staff if no one is coming to the counter. It doesn’t sound like a rosy option picture but what’s the option?

“We would need the Government to maintain the wage subsidy scheme, there’s no doubt about that. Once you open the doors doesn’t mean that businesses will be self-sufficient in their wage structure. I would envisage the wage subsidy scheme for all bars and restaurants around the country will have to continue until at least Christmas.”

Donal O’Keeffe, chief executive of the Licensed Vintners Association (LVA), called on the Government to allow pubs to reopen on June 29th, the date set aside for restaurants to begin trading again. At present, pubs are slated to reopen on August 10th, some five months after they closed as part of the lockdown of the economy to prevent the spread of the virus.

“It’s our view that all hospitality businesses should be subject to the same conditions and have the same opportunities to reopen at the same time,” he said.

The LVA, which has 550 members in Dublin, is finalising its pub recovery plan, which it hopes to present to Government Ministers later this week.

The wage subsidy scheme was introduced in March for an initial 12 weeks, and is helping to keep more than 400,000 workers in employment. Minister for Finance Paschal Donohoe indicated on Wednesday that the scheme would be reduced in the weeks ahead.

Gleesons employed 55 staff before the lockdown. Ten of those are on the wage subsidy scheme, while the rest are on unemployment benefit. The company also operates a 16-bed townhouse, which is closed, and a deli, which remains open. It has provided takeaway food for staff dealing with Covid-19 patients at St Vincent’s hospital in recent weeks.

“We will be re-employing, hopefully on June 29th, 25 of them,” Mr Gleeson said. “We intend to take bookings for tables, two hours maybe per table, a couple of sittings per night but we already see there is a demand there to get back in.”

Deal or no deal we are now heading for a hard Brexit 13:02
Danish retailer Jysk on track to double Irish store numbers by end of 2021 12:49
Central Bank rules out changes to mortgage rules during pandemic 12:31
Admission of mistake in Oxford vaccine dose raises doubts over reliability 12:30
Irish Life fund pays €49m for 94 Dalkey apartments 12:02

1 Karlin Lillington: How I managed to cut my mobile phone bill by at least half
2 Admission of mistake in Oxford vaccine dose raises doubts over reliability
3 State may face €1bn in compensation in Covid-19 case, Press Up claims
4 Smarter ways to heat your home: Eight of the best modern systems
5 Irish Life fund pays €49m for 94 Dalkey apartments
6 Lahinch Golf Club runs out of its own cash after €3m Covid-19 hit
7 Fiona Reddan: Who’s afraid of Revolut? Not AIB and BOI it seems
8 Central Bank rules out changes to mortgage rules during pandemic
9 Danish retailer Jysk on track to double Irish store numbers by end of 2021
10 Salesforce in talks to buy Slack in huge cloud software deal
Real news has value SUBSCRIBE